UCB Interim Report for the first nine months of 2013:

"The first nine months of 2013 confirm the solid growth trends of our core medicines, Cimzia®, Vimpat® and Neupro® as well as in emerging markets, while we continue to absorb the remaining post exclusivity impacts on Keppra®," said Roch Doliveux, CEO of UCB. "At the same time we are pleased with the regulatory approvals for Cimzia® for new indications, further broadening patient access in the U.S. and the EU. Additionally, as planned, we have recently filed Vimpat® for monotherapy in the U.S.”

Cimzia® (certolizumab pegol) for Crohn’s disease (CD) and rheumatoid arthritis (RA), continued its growth trend in the U.S. and Europe with a strong launch in Japan. Patient access has also been broadened to U.S. adult patients suffering from active psoriatic arthritis (PsA) or active ankylosing spondylitis (AS) and adult patients in the EU with severe active axial spondyloarthritis (axSpA).

Vimpat® (lacosamide) for adjunctive therapy for epilepsy, showed consistent double digit growth in all regions where the medicine is available. UCB has filed Vimpat® in the U.S. as monotherapy treatment in adult epilepsy patients with partial-onset seizures.

Neupro® (rotigotine), the patch for Parkinson’s disease (PD) and restless legs syndrome (RLS), grew by a strong 40% driven by the successful launch in the U.S. and supported by the launch in Japan.

Net sales of the anti-epileptic drug Keppra® (levetiracetam) decreased as expected. The post exclusivity erosion continues in both affected regions, with the U.S. declining at single-digit rates and the EU at double-digit rates. In the emerging markets and Japan (at constant exchange rates), Keppra® is growing at double-digit growth rates.

In March, Vimpat® (lacosamide) generated positive results in the Phase 3 U.S. monotherapy study in patients with partial onset seizures. The data have been submitted to the U.S. Food & Drug Administration (FDA) as part of its supplemental New Drug Application (sNDA) and were accepted for filing early October. Vimpat® for adjunctive epilepsy in children has started the phase 3 in September 2013, first results are expected in 2017.

In May, UCB and Otsuka Pharmaceutical, received regulatory approval in Japan for E Keppra® (levetiracetam) as adjunctive therapy in the treatment of partial-onset seizures in pediatric patients with epilepsy, aged four years and older.

Clinical pipeline update: immunology
In February, UCB filed with FDA and with the European Medicines Agency (EMA) applications to extend the marketing authorization for Cimzia® (certolizumab pegol) for the treatment of adult patients with active psoriatic arthritis (PsA) and for adult patients with active axial spondyloarthritis (axSpA). In March, UCB and Astellas, its immunology partner in Japan, launched Cimzia® in the treatment of rheumatoid arthritis (RA).

In September, the European CHMP adopted a positive opinion for Cimzia® in adult patients with severe active axial spondyloarthritis (axSpA) comprising ankylosing spondylitis (AS) and axSpA without radiographic evidence of AS (nr-axSpA). In October, the European Commission granted the amended marketing authorization.

In July, UCB entered into a world-wide exclusive license grant to R-Pharm, a privately owned pharmaceutical company based in Moscow, Russia, to develop and commercialize olokizumab in all indications, including rheumatoid arthritis.

For CDP7657, a CD40 ligand antibody under development in partnership with Biogen Idec, UCB started a phase 1b study in SLE. First results are expected in H2 2014.

A new compound entered the clinical development pipeline in phase 1: UCB5857, a selective and potent small molecule for the potential treatment of multiple immunological indications. First results are expected in Q2 2014.

UCB, Brussels, Belgium (www.ucb.com) is a global biopharmaceutical company focused on the discovery and development of innovative medicines and solutions to transform the lives of people living with severe diseases of the immune system or of the central nervous system. With 9 000 people in approximately 40 countries, the company generated revenue of EUR 3.4 billion in 2012. UCB is listed on Euronext Brussels (symbol: UCB). 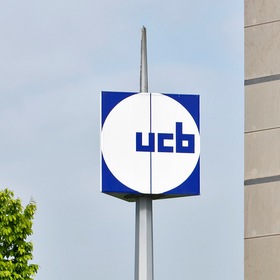