Brussels (Belgium), 27 February 2015 – 7:00 (CET) – regulated information –
"UCB continues its growth path with Cimzia®, Vimpat® and Neupro®, now accounting for 50% of our net sales. We continue to advance and prepare the launches of our next wave of potential new patient solutions: brivaracetam, epratuzumab and romosozumab. At the same time, we are very excited about the progress in our early pipeline," said Jean-Christophe Tellier, CEO UCB. "Our focus on superior and sustainable value for patients is also driving shareholder value – in-line with our aim to improve our profitability towards peer level by 2018."

Financial Performance in 2014
Total revenue in 2014 reached € 3 344 million a plus of 7% or 8% at constant exchange rates (CER) driven by the 24% growth of Cimzia®, Vimpat® and Neupro® reporting combined net sales of €1 468 million, while Keppra® reached € 665 million, a minus of 7%.
Cimzia® (certolizumab pegol) for inflammatory TNF mediated diseases continued its growth path and showed net sales of € 797 million, +34% (+35% CER), supported by continuously broadened patient access to patients in the U.S. with active psoriatic arthritis or active ankylosing spondylitis and patients in the EU with active psoriatic arthritis or severe active axial spondyloarthritis and in Japan -with partner Astellas. Cimzia® grew by 33% (33% CER) in the U.S. reaching € 503 million and by 39% in Europe to € 232 million. Net sales in Japan grew by 50% to €29 million.

Net sales of the anti-epileptic drug Keppra® (levetiracetam) driven by generic competition in the U.S. and Europe continued to decline, reporting net sales of € 665 million, down by 7% (-5% CER).

Non-recurring expenses reached € 107 million after expenses of € 34 million in 2013, mainly due to restructuring expenses and impairment charges related to the return of tozadenant. Net financial expenses went up by 14% to € 162 million, due to the valuation of financial liabilities, to impairments of investments, partially compensated by positive interest effect from the convertible bond conversion. Income tax expenses were € 6 million reflecting an average tax rate on recurring activities for 2014 of 8% compared to 37% in 2013.

Net profit of the Group reached € 199 million (+37%; +51% CER), of which € 209 million (+30%) is attributable to the UCB shareholders and a loss of € 10 million to the non-controlling interests. Core earnings per share, which reflect net profit attributable to UCB shareholders after tax effects of non-recurring items, financial one-offs and amortization of intangibles, reached € 1.69 per share based on 191 million weighted average shares outstanding from € 1.24 per share based on 182 million shares in 2013.

Dividend
The Board of Directors of UCB proposes a dividend of € 1.06 per share (gross), an increase by two €-cents or 2%.

Outlook 2015
UCB expects the continued growth of Cimzia®, Vimpat®, Neupro® to drive overall company growth. 2015 revenue should reach approximately € 3.55-3.65 billion; recurring EBITDA should increase to approximately € 710-740 million. Core earnings per share (EPS) are expected in the range of € 1.90 – 2.05 based on an average of 193.7 million shares outstanding.

R&D update
In September 2014, Vimpat® (lacosamide) was approved in the U.S. as monotherapy in the treatment of partial-onset seizures in adults with epilepsy. The U.S. authorities also approved a new single loading dose administration option for all formulations of Vimpat®.

In October 2014, UCB reported positive results for the Phase 3 study evaluating Vimpat® as adjunctive therapy in the treatment of Japanese and Chinese adult patients with partial-onset seizures. Regulatory submissions in Japan and China are planned in 2015. To support this expansion, in November 2014, UCB entered into an agreement with Daiichi Sankyo to jointly commercialize lacosamide in Japan.

Vimpat® is scheduled to move into Phase 3 development for primary generalized tonic-clonic seizures (PGTCS) in H1early 2015. The phase 3 study for the EU for Vimpat® as monotherapy in the treatment of partial-onset seizures in adults with epilepsy has completed patient recruitment; first results are expected in Q4 2015.

In January 2015, the US and EU regulatory authorities have accepted for review the new drug application and the marketing authorization application respectively for brivaracetam as adjunctive therapy for the treatment of partial-onset seizures in patients from 16 years of age with epilepsy.

In June 2014, first patients were enrolled in a Phase 3 study to assess the efficacy and safety of romosozumab in men with osteoporosis and high risk of fracture; first results from this study are expected in H2 2016. The phase 3 program evaluating romosozumab in post-menopausal osteoporosis (PMO) is ongoing as planned with initial results expected in H1 2016.

Dapirolizumab pegol (CDP7657), an anti-CD40L pegylated Fab being developed in systemic lupus erythematosus (SLE) jointly with Biogen Idec, completed a clinical Phase 1b study at the end of 2014, showing that dapirolizumab pegol was well tolerated. The compound is scheduled to progress to Phase 2 in 2016.

In January 2015, for Cimzia® (certolizumab pegol), Dermira and UCB announced the start of the Phase 3 program in psoriasis. Top-line data from this program are expected in 2017.

Also in January, Neuropore and UCB entered into world-wide collaboration in the development of a small molecule disease modifying treatment option for people living with Parkinson’s disease. A Phase 1 study is scheduled to start in 2015.
In February 2015, the Japanese regulatory authorities approved E Keppra as monotherapy in the treatment of partial-onset seizures in people living with epilepsy aged four years and above.

All other clinical development programs are continuing as planned.

FY 2014 – Financial highlights
A full financial report on the consolidated results is available on the UCB website: http://www.ucb.com/investors/Financials/ 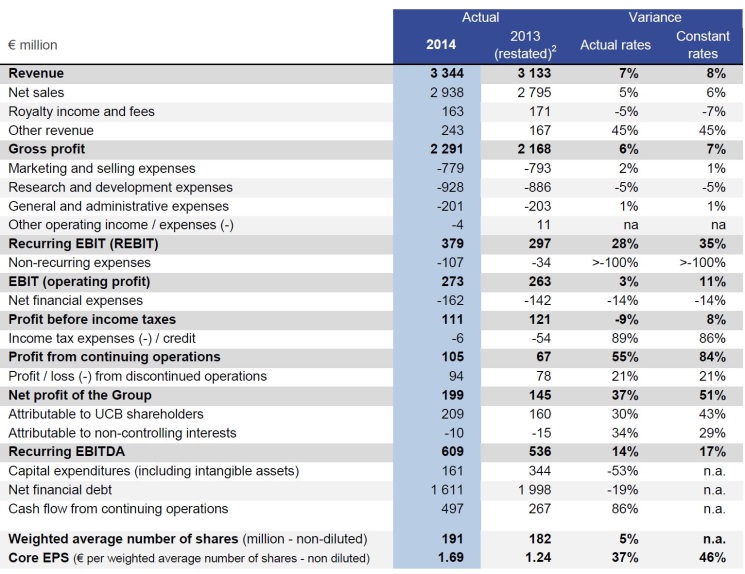 1    Except for the net financial debt, where 2013 relates to the situation as published in the audited consolidated financial statements as at 31 December 2013, restated.
2    Restatement related to IFRS 10 and Kremers Urban divestiture decision.
“The statutory auditor has issued an unqualified report with no emphasis of matter paragraph dated 26 February 2015 on the company’s consolidated accounts as of and for the year ended 31 December 2014, and has confirmed that the accounting data reported in the accompanying press release is consistent, in all material respects, with the accounts from which it has been derived.”