Neurology
In January 2019, Vimpat® (lacosamide) was approved in Japan for the treatment of partial onset seizures in children 4 years of age and older. In addition, two new formulations were approved: IV (intravenous) and dry syrup.

In June, the Vimpat® development program for the adjunctive treatment of primary generalized tonic-clonic seizures (PGTCS) in study participants 4 years of age and older achieved statistically significant positive results for both its primary (time to second seizure) and secondary efficacy (seizure freedom) endpoints. The novel primary endpoint “time-to-second-seizure” reduced placebo-exposure of patients substantially. Submissions of this new indication are planned in the first half 2020 to multiple regulatory agencies.

In March, UCB started an international (U.S., EU, Japan and China) phase 3 study with padsevonil in drug-resistant focal epilepsy patients. First headline results are expected in H2 2021 and will complement those from the ongoing Phase 2b, expected in H1 2020. Padsevonil is an innovative drug purposely designed with a novel dual mechanism of action to address the needs of uncontrolled patients.

In May, Nayzilam® (midazolam) nasal spray was approved in the U.S. to treat intermittent, stereotypic episodes of frequent seizure activity in people living with epilepsy. UCB expects to make the treatment available to patients in the coming months.

In June, UCB started as scheduled the confirmatory study (phase 3) with rozanolixizumab in patients with myasthenia gravis (MG). First headline results are expected in H1 2021.

Immunology
In March, UCB announced the approval of Cimzia® (certolizumab pegol) in the U.S. to include a new indication for the treatment of adults with active non-radiographic axial spondyloarthritis (nr-axSpA) with objective signs of inflammation.

In July and in China, Cimzia® was approved in combination with methotrexate for the treatment of moderate to severe, active rheumatoid arthritis in adult patients.

In March and April, the second and the third phase 3 program with bimekizumab - in psoriatic arthritis and in axial Spondyloarthitis - were initiated, slightly earlier than planned. First topline results are expected at the end of 2021.

In June, UCB and its partner Biogen initiated preparations for a phase 3 program with dapirolizumab pegol in patients with active systemic lupus erythematosus (SLE) despite standard-of-care treatment. The program is expected to start in H1 2020. This decision is based on the promising results of the phase 2b clinical trial, of which interim results were presented at EULAR in June 2019.

Early January 2019, UCB and Amgen announced the approval of Evenity® (romosozumab) in Japan. Evenity® is approved to reduce the risk of fractures and increase bone mineral density in men and post-menopausal women with osteoporosis at high risk of fracture.

In April, Evenity® was approved in the U.S. for the treatment of osteoporosis in post-menopausal women at high risk for fracture.

In May, Evenity® was approved in South Korea and in June in Canada and Australia.

In June, the Committee for Medicinal Products for Human Use (CHMP) of the European Medicines Agency adopted a negative opinion for romosozumab. The companies seek the re-examination of the CHMP opinion. 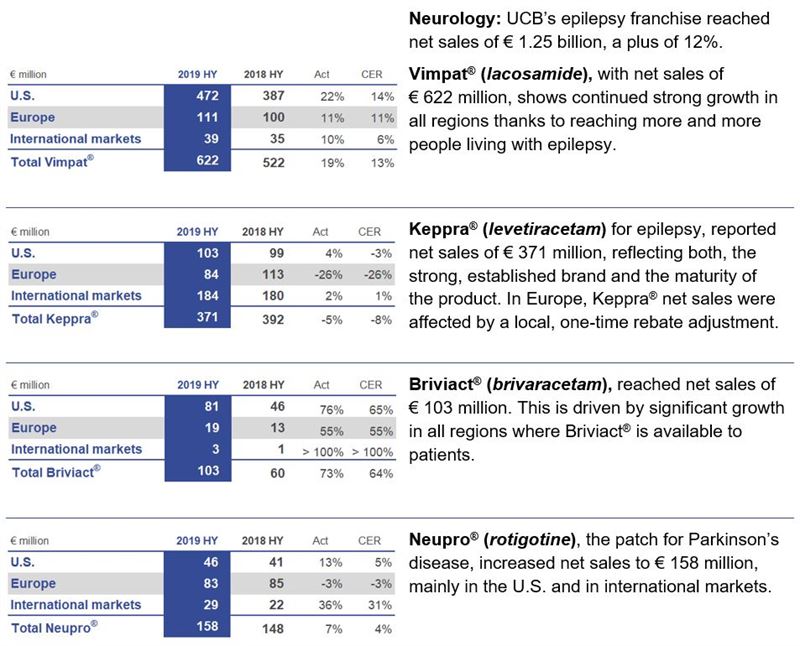 “The statutory auditor has issued an unqualified review report dated 24 July 2019 on the company’s condensed consolidated interim financial statements as of and for the six month period ended 30 June 2019, and has confirmed that the accounting data reported in the press release is consistent, in all material respects, with the accounts from which it has been derived.”

Royalty income and fees decreased to € 33 million from € 56 million. Other revenue reached € 71 million after € 67 million.

Operating expenses reached € 1 154 million (+11%; +8% CER) reflecting 14% higher marketing and selling expenses of € 502 million - driven by the launch of Cimzia® in psoriasis and launch preparations for Cimzia® in active non-radiographic axial spondyloarthritis (nr-axSpA), 13% higher research and development expenses of € 568 million – driven by the pipeline progress and resulting in a R&D ratio of 24% in the first six months of 2019 - and 8% higher general and administrative expenses of € 96 million. This resulted in an operating expense ratio (in relation to revenue) of 50% after 46% in the first half 2018.

Underlying profitability – rEBITDA9 - reached € 724 million after € 794 million (-9%; -1% CER) driven by continued net sales growth compensated by higher operating expenses ratio and reflecting the investments into the future of UCB, namely into product launches and product development. The recurring EBITDA ratio for the first six months of 2019 (in % of revenue) reached 31%, from 35% in 2018.

Income tax expenses were € 108 million compared to € 56 million in June 2018. The average effective tax rate on recurring activities was 20% compared to 9% in the same period of last year, but in line with the 2018 full year effective tax rate. The low tax rate in the first six months 2018 was driven by phasing of expenses and the U.S. tax reform.

Profit of the Group amounted to € 437 million (after € 574 million), of which € 411 million is attributable to UCB shareholders and € 26 million (after € 23 million) to non-controlling interests.

Core earnings per share, which reflect profit attributable to UCB shareholders, adjusted for the after-tax impact of non-recurring items, the financial one-offs, the after-tax contribution from discontinued operations and the net amortization of intangibles linked to sales, reached € 2.42 after € 3.09 based on 187 million weighted average shares outstanding.

CFO transition in 2020 - Five consecutive years of growth and strong half-year results in 2019 have underscored UCB’s robust performance over time. UCB is poised to further accelerate and expand to deliver on its Patient Value ambition, potentially launching 6 new products in the next 5 years.

With this goal in mind, UCB continues to focus its energies on strengthening its operating model to ensure maximum agility to meet our growth expectations for the years ahead. As part of this evolution, UCB implements in the coming months changes to its Executive Committee’s structure. These changes will involve adjusting the size of the Committee; allowing it to enhance the focus on the company’s core activity areas with increased agility. This will enable UCB to further evolve its patient value strategy.

In this context, UCB also announces that, after close to 13 years in the role, the company’s Chief Financial Officer, Detlef Thielgen, will be transitioning out within a year from now. A search for a successor has just begun.

CEO Jean-Christophe Tellier said: “During his 13 years at UCB, Detlef has played an instrumental part in UCB’s success and in bringing the company to the strong position it enjoys today. On behalf of the Board, of the Executive Committee and of all UCB teams, I would like to thank Detlef for his dedication to UCB over the years and for successfully helping to lead the company through its different transformation phases. Detlef and I will continue to work closely together to drive UCB forward, deliver on our objectives and ambition and ensure a smooth transfer of responsibilities and knowledge to his future successor.”

Details are available on https://www.ucb.com/investors/UCB-financials/Half-year-financial-results.

About UCB
UCB, Brussels, Belgium (www.ucb.com) is a global biopharmaceutical company focused on the discovery and development of innovative medicines and solutions to transform the lives of people living with severe diseases of the immune system or of the central nervous system. With more than 7 500 people in approximately 40 countries, the company generated revenue of € 4.6 billion in 2018. UCB is listed on Euronext Brussels (symbol: UCB). Follow us on Twitter: @UCB_news

Forward looking statements
This press release contains forward-looking statements based on current plans, estimates and beliefs of management. All statements, other than statements of historical fact, are statements that could be deemed forward-looking statements, including estimates of revenues, operating margins, capital expenditures, cash, other financial information, expected legal, political, regulatory or clinical results and other such estimates and results. By their nature, such forward-looking statements are not guarantees of future performance and are subject to risks, uncertainties and assumptions which could cause actual results to differ materially from those that may be implied by such forward-looking statements contained in this press release. Important factors that could result in such differences include: changes in general economic, business and competitive conditions, the inability to obtain necessary regulatory approvals or to obtain them on acceptable terms, costs associated with research and development, changes in the prospects for products in the pipeline or under development by UCB, effects of future judicial decisions or governmental investigations, product liability claims, challenges to patent protection for products or product candidates, changes in laws or regulations, exchange rate fluctuations, changes or uncertainties in tax laws or the administration of such laws and hiring and retention of its employees.
Additionally, information contained in this document shall not constitute an offer to sell or the solicitation of an offer to buy any securities, nor shall there be any offer, solicitation or sale of securities in any jurisdiction in which such offer, solicitation or sale would be unlawful prior to the registration or qualification under the securities laws of such jurisdiction. UCB is providing this information as of the date of this document and expressly disclaims any duty to update any information contained in this press release, either to confirm the actual results or to report a change in its expectations.

There is no guarantee that new product candidates in the pipeline will progress to product approval or that new indications for existing products will be developed and approved. Products or potential products which are the subject of partnerships, joint ventures or licensing collaborations may be subject to differences between the partners. Also, UCB or others could discover safety, side effects or manufacturing problems with its products after they are marketed.
Moreover, sales may be impacted by international and domestic trends toward managed care and health care cost containment and the reimbursement policies imposed by third-party payers as well as legislation affecting biopharmaceutical pricing and reimbursement. 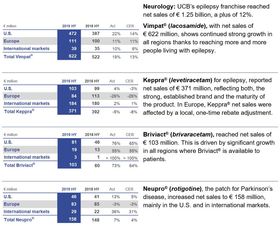 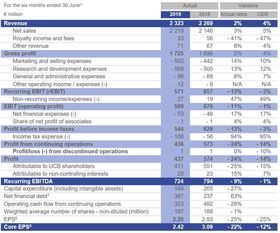