The World Health Organisation estimates that 9 million people in China have epilepsy, with around 400,000 new cases of seizures and epilepsy occurring in China each year. It is estimated that one out of two people living with epilepsy do not receive adequate care due to a lack of knowledge in the workplace, in schools and in the wider community.

UCB demonstrates continued commitment to changing the perception of the disease and to improving the standard of care of epilepsy by supporting a number of initiatives. These include the epilepsy units in Shanghai and Beijing in association with the Chinese Association Against Epilepsy, and the Rainbow Bridge awareness and diagnosis initiative in association with Project HOPE aimed at doctors, teachers and children living with epilepsy.

Our latest CSR initiative builds on a strong partnership with the Business Development Center of the Red Cross Society of China (BDC-RCSC) and the ‘Health and Hope Fund’ agreement. 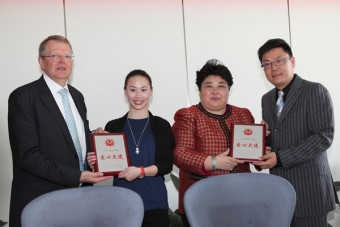 Project ambassadors Li Ting and Xhaolei Wang receive their certificates from Dirk Teuwen (UCB) and  Jiang Dan (Red Cross China).
In the initial phase, the project supports training of 95 village doctors from remote areas of the Xinjiang province in northwestern China. As part of a two-week training course, these doctors were provided with education and hands-on training from senior academic staff from several university hospitals from across China. The course also covered the basics of epilepsy, diagnosis and treatment of epilepsy.

This project provides for six ambulances, as part of the “Red Cross 999 Ambulances”, serviced by mobile EEG equipment for which technical assistants are being trained. Through an available telemedicine network, neurology staff at the Sino-Japan Friendship Hospital in Beijing will assist in the interpretation of the EEG readings and provide guidance on treatment.

The closing ceremony of the 14-day training course took place in the prestigious Great Hall of the People on Tiannamen Square, in the presence of 3 past Vice Chairs of the National Committee of the Chinese People’s Political Consultative Conference, senior staff of the Red Cross Society of China and the National Health and Family Planning Commission, and the Belgian Ambassador to China. Village doctors were keen to return to their home villages, to care for their patients. With the intense training course completed, the village doctors embarked on a 34-hour train journey to their homes in Xinjiang.

This village doctors' training also triggered the Chinese media’s interest. Dozens of media coverage on print newspapers and mainstream online news portals reached large populations in all circles of China society. Even CCTV, the China Central Television Station, the most important TV news channel, broadcasted the news on the Xinjiang village doctors’ training. Large media exposure really increases the programme and disease awareness among the public, which is highly in line with UCB’s CSR philosophy.

UCB is confident that these capacity-building initiatives will have a lasting impact on epilepsy care in the world’s most populous nation and will allow patients and their families to live normal lives.