I have discovered inner resources

Parkinson’s is not a reason to give up. We all have so many potential resources in ourselves. But they are hidden and we have to search for them.

There aren’t many people who can say they have cycled over 15 Alpine passes, including the highest in Switzerland, Austria and Italy. But Wolfgang, diagnosed with Parkinson’s disease 15 years ago, before he was 40, can say it!

‘I don’t recommend that everyone has to cross the Alps by bicycle, but I’d like to encourage everybody to defi ne their own targets and challenges, and discover their own Alps,’ he says.

For the fi rst fi ve years after his diagnosis, Wolfgang took his medication to control his symptoms, and went on raising his children with his wife, working, and living his life. It was only when he started having “freezing” attacks when he couldn’t move properly that Wolfgang couldn’t hide his Parkinson’s disease any more.

‘When I looked in the mirror I saw a man with hanging shoulders and fl oppy muscles, so I decided to take more responsibility for my health. I started to run every morning and visited a fi tness centre three times a week.’

With training, his muscles were rebuilt, his self-confi dence was restored and many of his problems went away. He’s always liked bike riding, but he started taking it more seriously, and found it worked like another medicine:

‘When I ride my bike, I have to share narrow streets with motorised road users, so I must keep my balance and control my bike to avoid dangerous situations. When walking and moving are diffi cult for me, I can still ride my bike. When my voice is affected by my “freezing,” riding the bike can sometimes even make my speech better.’

Writing poetry also gave Wolfgang enormous satisfaction – to be able to express his feelings and thoughts about Parkinson’s disease:

‘Of course, I’d still prefer to be perfectly healthy. But it’s true that having a life-changing illness can help people fi nd the potential in themselves they’d never known was there. That was certainly true for me.’ 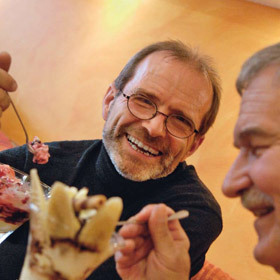