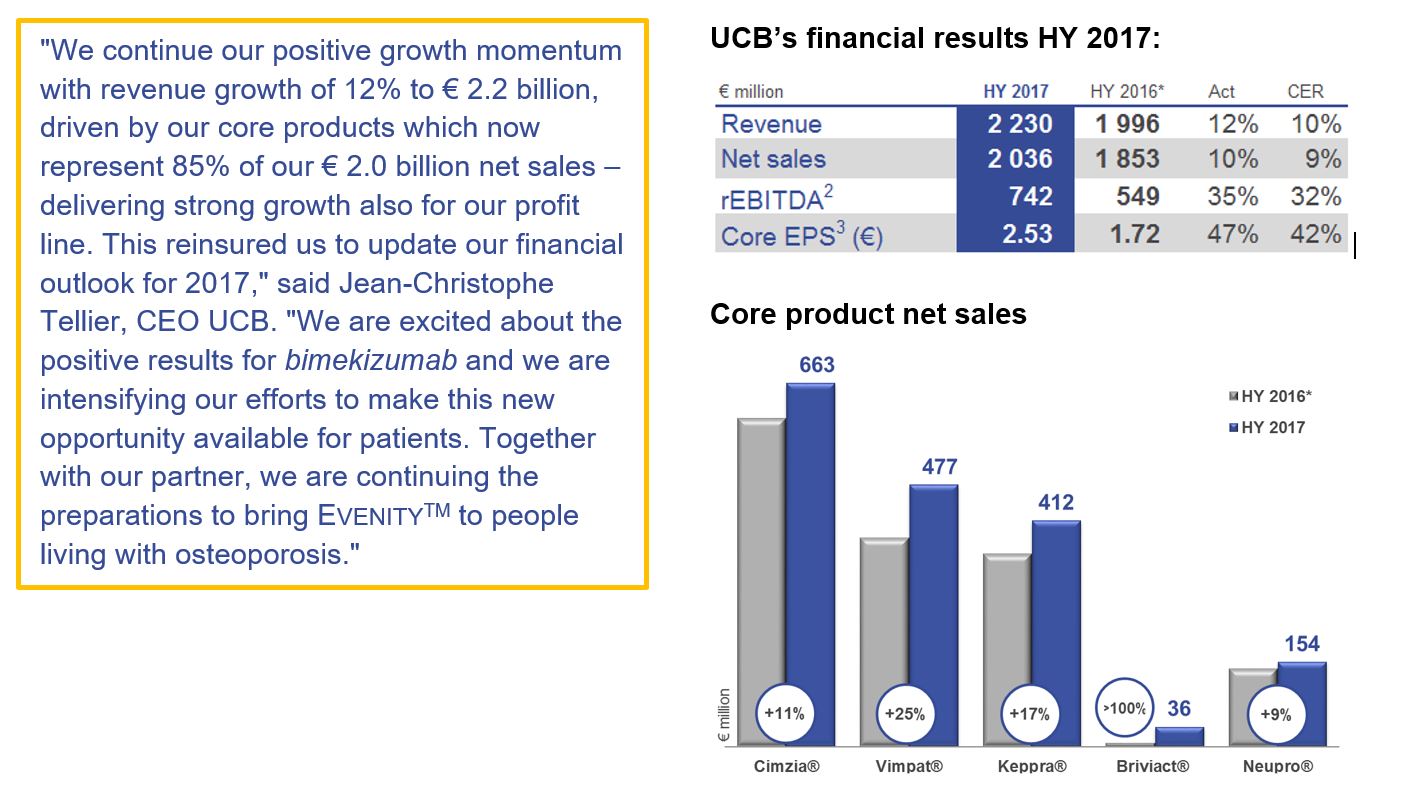 In the first six months of 2017, revenue and net sales continued their growth driven by core product growth - their net sales combined reached € 1.7 billion, an increase of 18%.
Underlying profitability (rEBITDA2) increased by 35% to € 742 million reflecting continued improvement and a one-time other revenue of € 56 million.
Profit for the Group amounted to € 451 million, a plus of 43%, of which € 431 million is attributable to UCB shareholders. Core earnings per share reflect this performance with € 2.53 in the first six months of 2017 after € 1.72 per share in 2016.
Financial outlook 2017 updated
UCB increases the financial guidance for 2017: Revenue are now expected to reach € 4.35 - 4.45 billion, recurring EBITDA2 should increase to € 1.15 – 1.25 billion. Core earnings per share are expected in the range of € 3.70 – 4.15 based on an expected average of 188 million shares outstanding.
R&D update
Immunology
Data from the CRIB and CRADLE studies for Cimzia® (certolizumab pegol) for women of child-bearing age were filed with the European and American health authorities, in May and June respectively.
In July, UCB and its partner Dermira submitted a marketing application to U.S. and EU regulatory authorities for Cimzia® in psoriasis.
In July, very positive results from a Phase 2b study in patients with psoriasis were reached for bimekizumab demonstrating skin clearance: Up to 79% of patients achieved at least 90% skin clearance at week 12 and up to 60% of patients achieved complete skin clearance at week 12 (primary endpoint), a secondary efficacy variable. Based on these excellent results, UCB is ready to rapidly to advance the phase 3 clinical development program in psoriasis and continues clinical trials in psoriatic arthritis and ankylosing spondylitis (with phase 2b results in 2018).
The phase 2a study testing bimekizumab as add-on therapy to rheumatoid arthritis patients not fully responding to initial TNF therapy was completed. Primary endpoint was met and no new safety signal observed. However, data do not suggest sufficient patient value potential for the study population to proceed at this time.
Neurology
In July, UCB filed for Briviact® (brivaracetam) for children with epilepsy of 4 years of age and older a marketing authorization with the EU authorities for the adjunctive treatment of partial-onset seizures and with the U.S. authorities for the monotherapy and adjunctive treatment.
In July, the Committee for Medicinal Products for Human Use of the European Medicines Agency has adopted a positive opinion for Vimpat® (lacosamide) for the treatment of epilepsy in children from 4 to 16 years of age.
In July, an open-label phase 1b study with UCB3491/radiprodil in patients with refractory infantile spasms started. First headline results are expected in H1 2018.
Bone
In May, UCB and Amgen announced that the romosozumab ARCH study met both primary endpoints and the key secondary endpoint. At the primary analysis, treatment with romosozumab for 12 months followed by alendronate significantly reduced the incidence of new vertebral fractures through 24 months, clinical fractures (primary endpoints) and non-vertebral fractures (key secondary endpoint) in postmenopausal women with osteoporosis at high risk for fracture, compared to alendronate alone. An imbalance in positively adjudicated cardiovascular serious adverse events was observed as a new safety signal. This newly observed cardiovascular safety signal will have to be assessed as part of the overall benefit:risk profile for romosozumab. UCB and Amgen are engaging with global regulators and medical experts in the field to conduct a thorough evaluation of these data.
In July, the U.S. authorities issued a “complete response letter” requesting efficacy and safety data from the ARCH study as well from the BRIDGE study. This request will be addressed in the form of a resubmission, which is an extension of the current review in the U.S.
All other clinical development programs are continuing as planned. 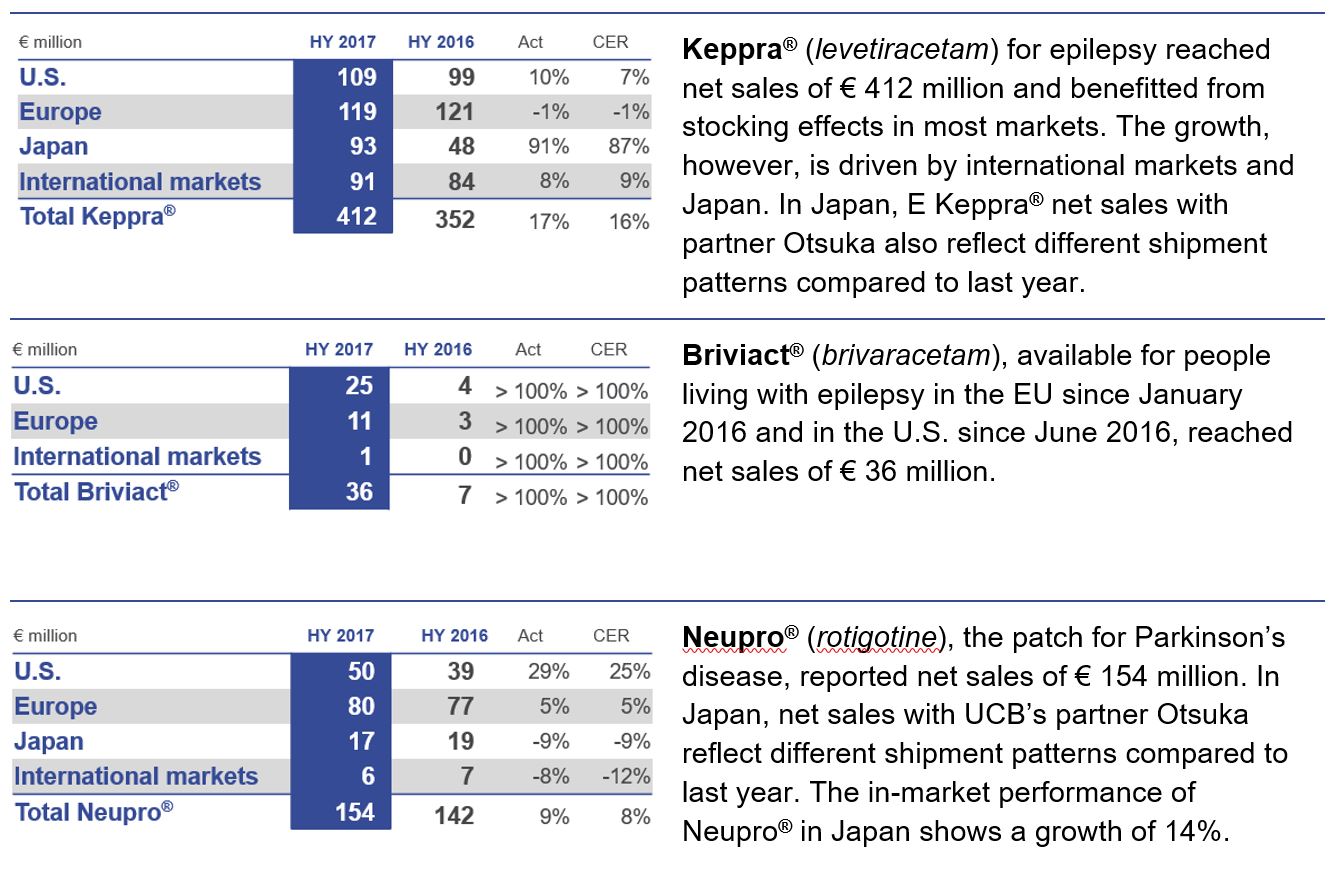 Revenue and net sales increased to € 2.2 billion (+12%; +10% CER) and € 2.0 billion (+10%; +9% CER) respectively driven by continued growth of the core medicines. Adjusted for divestitures in 2016 and one-time other revenue of € 56 million in 2017, the increase of revenue and net sales was 13% and 14% respectively.
Royalty income were € 58 million (+14%; +15% CER) due stable royalty streams for existing products and from newly approved biotechnology product. Other revenue increased to € 136 million (+48%; +45% CER), due to the one-time other revenue of € 56 million for out-licensing the OTC-allergy drug Xyzal® (levoceterizine).
Gross profit increased to € 1.67 billion (+17%, +15% CER), due to net sales growth and improved product mix, also due to the divestitures in 2016.
Operating expenses increased by 6% reaching € 1.05 billion (+6% CER). This reflects 3% higher marketing and selling expenses of € 464 million, 4% higher research and development expenses of € 474 million and 6% higher general and administrative expenses of € 93 million.
Underlying profitability – rEBITDA2- reached € 742 million (+35%; +32% CER), driven by higher gross profit and an improved operating expense ratio; adjusted for the one-time other revenue this growth was +25%.
Non-recurring income was € 1 million after € 50 million in 2016 which was driven by a gain from the divestiture of UCB's nitrates established brands.
Net financial expenses decreased by 15% to € 55 million from € 65 million in 2016 which was driven by an impairment in 2016 of warrants received in connection with the Kremers Urban divestiture.
Income tax expenses were € 114 million reflecting an average tax rate on recurring activities of 20%.
Profit of the Group was € 451 million (+43%; 38% CER) of which € 431 million is attributable to UCB shareholders and € 20 million to non-controlling interests. For the first six months 2016, profit was € 316 million of which € 300 million was attributable to UCB shareholders and € 16 million to non-controlling interests.
Core earnings per share, which reflect profit attributable to UCB shareholders after tax effects of non-recurring items, financial one-offs and amortization of intangibles, reached € 2.53 per share based on 188 million weighted average shares outstanding from € 1.72 per share in 2016. (+47%; +42% CER)
Outlook 2017 updated - UCB expects continued company growth driven by the core medicines reaching more and more patients. UCB’s key financial performance indicators are now expected in the range of € 4.35 - 4.45 billion for 2017 revenue, recurring EBITDA2 in the range of € 1.15 – 1.25 billion and core earnings per share in the range of € 3.70 - 4.15 based on an expected average of 188 million shares outstanding.
HY 2017 – Financial highlights
Find the HY financial reports on the UCB website: http://www.ucb.com/investors/Download-center 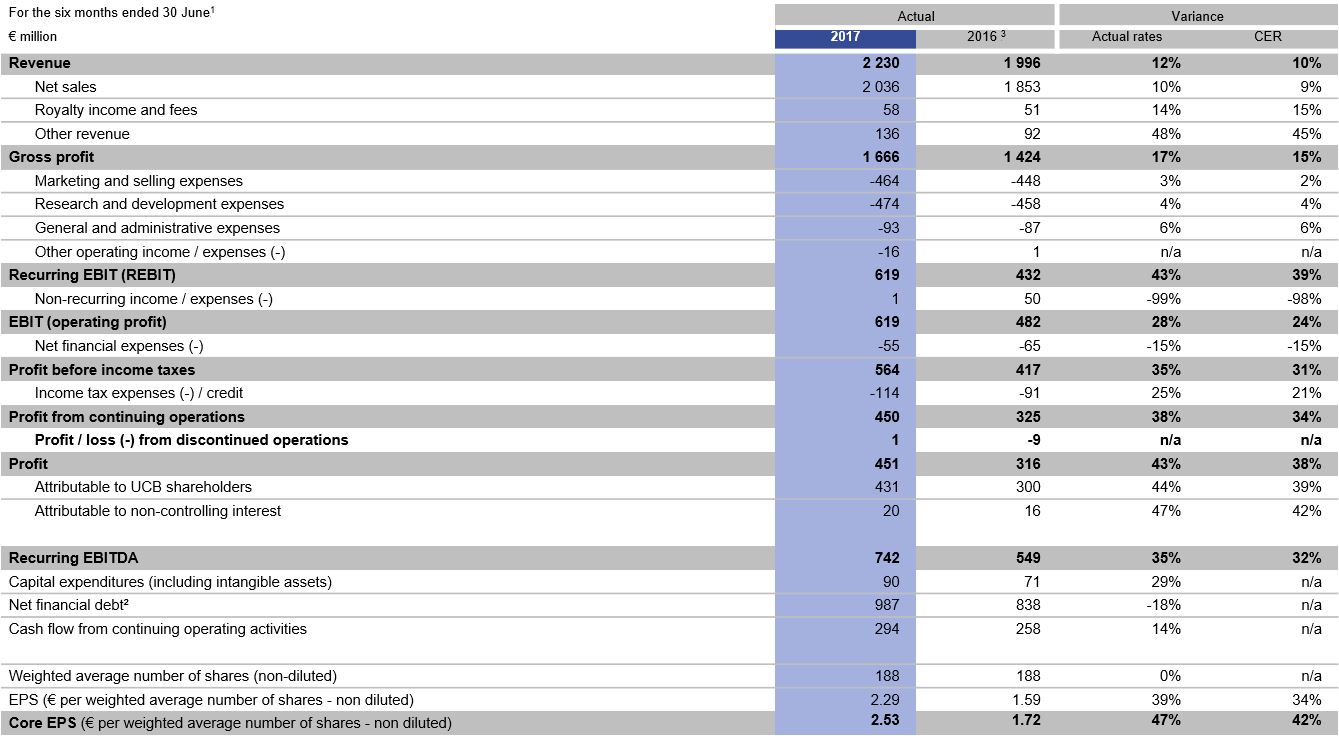 1 Due to rounding, some financial data may not add up in the tables included in this management report.
2 For the net financial debt, the reporting date for comparative period is 31 December 2016.
3 After reclassifications due to IFRS 15
“The statutory auditor has issued an unqualified review report dated 26 July 2017 on the company’s condensed consolidated interim financial statements as of and for the six month period ended 30 June 2017, and has confirmed that the accounting data reported in the press release is consistent, in all material respects, with the accounts from which it has been derived.”
UCB will host a conference call/video webcast at 09.00 (ET) / 14.00 (BT) 15.00 (CEST).
Details are available on http://www.ucb.com/investors/UCB-financials/Half-year-financial-results .
CER = constant exchange rates
* 2016 figures have been adjusted reflecting IFRS 15 implementation in 2017
2 rEBITDA = recurring Earnings Before Interest, Taxes, Depreciation and Amortization charges;
3 Core EPS = core earnings per share

About UCB
UCB, Brussels, Belgium (www.ucb.com) is a global biopharmaceutical company focused on the discovery and development of innovative medicines and solutions to transform the lives of people living with severe diseases of the immune system or of the central nervous system. With more than 7 500 people in approximately 40 countries, the company generated revenue of € 4.2 billion in 2016. UCB is listed on Euronext Brussels (symbol: UCB). Follow us on Twitter: @UCB_news
Forward looking statements
This press release contains forward-looking statements based on current plans, estimates and beliefs of management. All statements, other than statements of historical fact, are statements that could be deemed forward-looking statements, including estimates of revenues, operating margins, capital expenditures, cash, other financial information, expected legal, political, regulatory or clinical results and other such estimates and results. By their nature, such forward-looking statements are not guarantees of future performance and are subject to risks, uncertainties and assumptions which could cause actual results to differ materially from those that may be implied by such forward-looking statements contained in this press release. Important factors that could result in such differences include: changes in general economic, business and competitive conditions, the inability to obtain necessary regulatory approvals or to obtain them on acceptable terms, costs associated with research and development, changes in the prospects for products in the pipeline or under development by UCB, effects of future judicial decisions or governmental investigations, product liability claims, challenges to patent protection for products or product candidates, changes in laws or regulations, exchange rate fluctuations, changes or uncertainties in tax laws or the administration of such laws and hiring and retention of its employees.
Additionally, information contained in this document shall not constitute an offer to sell or the solicitation of an offer to buy any securities, nor shall there be any offer, solicitation or sale of securities in any jurisdiction in which such offer, solicitation or sale would be unlawful prior to the registration or qualification under the securities laws of such jurisdiction. UCB is providing this information as of the date of this document and expressly disclaims any duty to update any information contained in this press release, either to confirm the actual results or to report a change in its expectations.
There is no guarantee that new product candidates in the pipeline will progress to product approval or that new indications for existing products will be developed and approved. Products or potential products which are the subject of partnerships, joint ventures or licensing collaborations may be subject to differences between the partners. Also, UCB or others could discover safety, side effects or manufacturing problems with its products after they are marketed.
Moreover, sales may be impacted by international and domestic trends toward managed care and health care cost containment and the reimbursement policies imposed by third-party payers as well as legislation affecting biopharmaceutical pricing and reimbursement.