UCB half year results 2012: on track for growth

"With growth of 45% in the first half of 2012, Cimzia®, Vimpat® and Neupro® have reached over 354,000 patients and sales exceeding EUR 400 million. This performance further confirms our ambition to reach more than 1.5 million patients with Cimzia®, Vimpat® and Neupro®, with a peak sales target of at least EUR 3.1 billion in the second half of the decade," said Roch Doliveux, Chief Executive Officer of UCB. "This and solid Keppra® contribution allows UCB to even further invest in our future growth as we have now three phase 3 projects in clinical development aiming at more breakthrough innovation to people living with severe diseases."

The anti-epileptic Keppra® (levetiracetam) reached net sales of EUR 445 million which is 12%[1] (-15% at constant rates) lower than last year. The continued post-patent expiry erosion in North America (-10%[1]) and the increasing post-patent expiry erosion in Europe (-25%[1]) stands against a strong performance in the 'Rest of World' (+70%[1]) driven by the growth of E Keppra® in Japan.

Royalty income & fees reached EUR 83 million (-13%) due to expiration of patents, despite higher royalties received for Toviaz® (fesoterodine) which increased by 21%. Other revenue for the first half of 2012 increased to EUR 95 million (+16%) mainly driven by income received from UCB's collaborations in Japan, namely Otsuka and Astellas.

Gross profit reached EUR 1 183 million and is 2% higher than in first half 2011 following the increase of total revenue.

Operating expenses increased by 14% to EUR 956 million in first half 2012 with 9% increase in marketing & selling expenses reflecting the U.S. Neupro® and other regional launches of UCB's core medicines and with a 24% growth in research & development expenses progressing advanced development projects and strengthening the early portfolio. General & administrative expenses were held to a 3% increase.

As a result and in-line with the financial guidance for 2012, underlying profitability -recurring EBITDA- went down by 22% to EUR 347 million reflecting an increase in revenue contrasted by higher operating expenses.

The average tax rate on recurring activities is 14% in the first half of 2012 compared to 21% in the same period of last year. The main reasons for the lower tax rate are reduction of tax rates, further recognition of tax losses and release of provisions.

Net profit after minority interest for the first half year is EUR 137 million (-31%). Core earnings per share (EPS), which reflect the after tax effects of non-recurring items, financial one-offs and amortisation of intangibles, decreased from EUR 1.44 in June 2011 to EUR 1.09 in June 2012, based on 179.1 million weighted average shares outstanding in June 2012 after 179.5 million in June 2011.

R&D update immunology
In January, UCB has filed certolizumab pegol for marketing authorisation with the Japanese Ministry of Health, Labour and Welfare (MHLW). UCB and Astellas Pharma Inc. have agreed to co-develop and co-promote certolizumab pegol in Japan.
In February and April respectively, the Phase 3 trials for Cimzia® in psoriatic arthritis (PsA) and axial spondyloarthritis (AxSpA) including ankylosing spondylitis (AS) reported first positive results. Submission to regulatory authorities for these indications is planned by the end of 2012.
In March, for Cimzia® the Phase 3 program in juvenile rheumatoid arthritis, (Juvenile Idiopathic Arthritis, JIA) has started as scheduled. First results are expected in the second half of 2014.

In April, the sclerostin antibody (CDP7851/AMG 785) Phase 3 clinical trial program started for the treatment of postmenopausal osteoporosis (PMO). The Phase 3 program includes a two-year study in more than 5,000 postmenopausal women with osteoporosis where the primary endpoint will evaluate the incidence of new vertebral fractures at 12 months. Initial results from the phase 3 program are expected by the end of 2015.

The other clinical development projects in immunology, namely Cimzia® ExxelerateTM and C-EarlyTM, epratuzumab in systemic lupus erythematosus (SLE), CDP7851 in fracture healing, olokizumab in RA and CDP7657 in SLE are advancing as planned.

Outlook 2012 updated
UCB expects its financial results in 2012 to be driven by the continued growth of Cimzia®, Vimpat® and Neupro® as well as by post-exclusivity expiry erosion for Keppra®. Revenue 2012 is now anticipated to exceed EUR 3.2 billion (previously approx. EUR 3.1bn). Recurring EBITDA is expected in the range of EUR 630-660 million (unchanged). Core earnings per share are expected at approximately EUR 1.70 – based on 179 million shares outstanding (previously EUR 1.60-1.70).

HY 2012 – Financial highlights
A full financial report on the consolidated results is available on the UCB website:
http://www.ucb.com/investors/financials/Financials-2012

"The statutory auditor has issued an unqualified review report dated 31 July 2012 on the company’s condensed consolidated interim financial statements as of and for the six month period ended 30 June 2012, and has confirmed that the accounting data reported in the press release is consistent, in all material respects, with the accounts from which it has been derived."

August 1, 2012 at 14.00 (CET) – Analysts' and investors' conference call/ Webcast
Find the link to the webcast or dial-in details for the conference call on http://www.ucb.com/investors/financials/Financials-2012 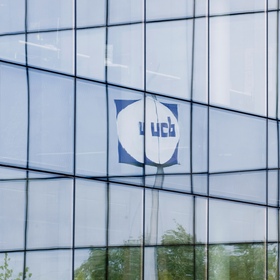