"UCB is off to a good start in 2011 with more than 219 000 patients benefiting from our core medicines Cimzia®, Vimpat® and Neupro®, which have reached a combined sales total of EUR 134 million in the first three months. While we are facing generic competition this year - especially for Keppra® in Europe -, we can subsequently look forward to a decade that is uninterrupted by patent expirations. This, coupled with the advancement of our new products, should see UCB enter a period of sustainable company growth," said Roch Doliveux, CEO of UCB. "We are especially excited about the positive results with CDP7851 project that we perform with Amgen. The favorable comparison with established therapies indicates the potential for a change of treatment paradigms with CDP7851 in post-menopausal osteoporosis. This fuels our energy working towards providing a new treatment option for the millions of women living with PMO."

Revenue in the first three months of 2011 increased by 13%1 to EUR 893 million driven by the growth of core products Cimzia®, Vimpat® and Neupro® combined with the solid performance generated by the established product portfolio, including Keppra®.

Underlying profitability (recurring EBITDA) and net profit performance were in line with the company's expectations.

Cimzia® (certolizumab pegol) for Crohn’s disease (CD) and rheumatoid arthritis (RA), reached net sales of EUR 67 million (+92%1) in the first three months of 2011 and is building good momentum in a competitive market. The roll-out of Cimzia® in the U.S. and in Europe continues with now more than 24 000 patients treated with the drug worldwide. Cimzia® is available in 21 countries with further launches expected this year. The number of prescriptions for Cimzia® in the treatment of Crohn’s disease (CD) and rheumatoid arthritis (RA) in the U.S. is growing faster than the total market with a 20.3%2 and a 3.6%3 share of new prescriptions (NRx) in the CD and RA segments of the subcutaneous anti-TNF market respectively.

The new anti-epileptic drug, Vimpat® (lacosamide) is growing by 97%1 in the 22 markets where UCB has launched with net sales of EUR 46 million and more than 119 000 patients benefiting from the drug at the end of the first quarter of the year. Available in Europe and in the U.S. as an add-on therapy for the treatment of partial-onset seizures, Vimpat® continues to gain market share. The successful launch in the U.S. epilepsy market is reflected by a strong prescription take-off: 1.9% NRx share of the anti-epileptic drug market4 .

Neupro® (rotigotine), the patch for Parkinson’s disease (PD) and restless legs syndrome (RLS) had net sales of EUR 21 million (+18%1) in the 23 markets where the drug has been launched, with more than 76 000 patients currently being treated with the drug.

Mature products
Net sales of the anti-epileptic drug Keppra® (levetiracetam) increased by a double digit percentage during the first three months of 2011. Market leadership of the Keppra® franchise in Europe and in international markets remained strong. Meanwhile, the generic erosion in the U.S. has stabilised and in Europe there have been two generic entries in Germany since March 2011. Xyzal® (levocetirizine) for allergy increased net sales following its launch in Japan. Venlafaxine XR showed strong decline - impacted by the generic competition since July 2010. Net sales of Tussionex® (hydrocodone polistirex and chlorpheniramine polistirex) also decreased due to generic competition partially compensated by the company’s authorised generic.

The acquisition of UCB’s manufacturing businesses in Germany and Italy by Aesica was completed in March 2011. This new partnership is part of UCB’s strategy to optimise its manufacturing network while securing the long-term supply of our products and a long-term future for the sites’ employees.

R&D update: immunology
Two clinical studies on Cimzia® (certolizumab pegol) for the treatment of rheumatoid arthritis (RA) in Japan completed positively ahead of plan, both trials met their primary endpoints. Submission of an application for regulatory approval to the Japanese authorities is under preparation in collaboration with Otsuka Pharmaceutical.

CDP7851 ("sclerostin antibody" also known as AMG 785), a novel therapy for bone loss disorders reported positive top-line results from the Phase 2 clinical study comparing CDP7851 to placebo in post-menopausal women with low bone mineral density for the treatment of post-menopausal osteoporosis. This Phase 2 study met its primary endpoint, demonstrating significant increases in lumbar spine bone mineral density at month 12 for CDP7851 active arms versus the placebo arm. In addition, CDP7851 compared positively with the two active comparators, teriparatide and alendronate. The overall incidence of adverse events was generally balanced between groups. Consistent with previous studies, injection site reactions were reported more frequently in those patients receiving CDP7851 Amgen and UCB have collaborated for the development of CDP7851/AMG785 for the treatment of bone-related conditions, including PMO and fracture healing. Phase 2 development in fracture healing is ongoing with first results expected in 2012.

R&D update: central nervous system (CNS)
In March 2011, the Committee for Medicinal Products for Human Use (CHMP) of the European Medicines Agency (EMA) informed UCB that Xyrem® (sodium oxybate) will not be recommended as a treatment for fibromyalgia syndrome in adults.

Outlook 2011 confirmed
UCB's results in 2011 are expected to be driven by the continued intense growth of Cimzia®, Vimpat® and Neupro® which should compensate to a large extent – but not entirely - the effects of the remaining major patent expiries. From 2012 onwards, more than a decade without major patent expiration combined with momentum of new products is expected to provide a solid basis for driving UCB's growth.

Total revenue is expected between EUR 3.0 and 3.1 billion in 2011 due to generic competition to Keppra® in the EU and the full annualised generic competition to U.S. products as well as further erosion of mature products, partially offset by the performance of newly launched products. In 2011, UCB’s recurring EBITDA is expected to be in the range between EUR 650 and 680 million. Core EPS 2011 are expected to reach approximately EUR 1.60 and 1.70. 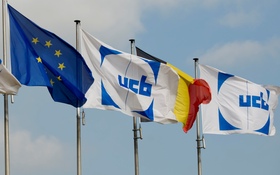 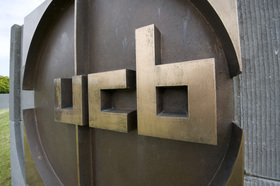