"We are pleased with UCB's financial results reported today. The intense growth of Cimzia®, Vimpat® and Neupro® has touched more than 248,000 patients already," said Roch Doliveux, Chief Executive Officer of UCB. "We are excited about the momentum of Cimzia®, Vimpat® and Neupro®, about the potential UCB new medicines from our promising pipeline and about the fact that from 2012 onward, we will have a decade without impacts from major patent expirations."

Financial performance in the first half year 2011
Revenue in the first six months of 2011 increased by 2% to EUR 1 679 million. Net sales amounted to EUR 1 501 million or 5% higher than the previous interim period because of the solid performance of the core medicines Cimzia®, Vimpat® and Neupro® as well as Keppra® in Europe and Japan.

Cimzia® (certolizumab pegol) for Crohn’s disease (CD) and rheumatoid arthritis (RA) reached net sales of EUR 143 million (+72%). The roll-out of Cimzia® continues with now more than 27 000 patients treated with the drug worldwide. Cimzia® is available in 23 countries. The anti-epileptic medicine, Vimpat® (lacosamide) made a good start in the 23 markets where UCB has already launched reaching net sales of EUR 97 million (+76%) with more than 135 000 patients being treated. The Neupro® (rotigotine) patch for Parkinson’s disease and restless legs syndrome had net sales increasing by 17% to EUR 45 million in the 24 markets where the drug has been launched so far with more than 85 000 patients currently being treated.

The anti-epileptic Keppra® (levetiracetam) reached net sales of EUR 507 million which is 10% higher than last year. The continued post-patent expiry erosion in North America (-13%) was compensated by extended market leadership in Europe (+20%) benefiting from limited generic entry to date and in 'Rest of World' (+25%) driven by the launch of E Keppra® in Japan. Zyrtec® (cetirizine), for allergy, had increased net sales of 11% to EUR 166 million reflecting the strong allergy season. Xyzal® (levocetirizine), for allergy, reached net sales of EUR 68 million (+7%) driven by its launch in Japan, whilst sales in Europe decreased by 21%, impacted by further generic entries. In the U.S., venlafaxine XR and Tussionex™ (hydrocodone polistirex and chlorpheniramine polistirex) showed a strong decline as expected, with net sales of EUR 36 million (-63%) and EUR 24 million (-45%) respectively – due to generic competition.

Royalty income & fees amounted to EUR 96 million (-10%) due to lower royalties received for Toviaz® (fesoterodine) and lower other royalty income, due to the divestiture of smaller products in 2010 and generic competition. Other revenue for the first half of 2011 amounted to EUR 82 million (-22%) mainly driven by lower profit-sharing with sanofi-aventis on Xyzal® sales in the U.S. due to generic competition.

Gross profit of EUR 1 158 million is 5% higher than in first half 2010 following the increase of net sales and lower cost of sales.

As a result, underlying profitability -recurring EBITDA- is up by 11% to EUR 443 million reflecting the increase in revenue and gross profit. Recurring EBIT is up 19% to EUR 319 million.

The average tax rate on recurring activities is 21% in the first half of 2011 compared to 22% in the same period of last year.

Balance Sheet and Cash Flow
As of 30 June 2011, UCB’s total liabilities and shareholders equity were at EUR 8 508 million. Total equity increased by EUR 161 million between 31 December 2010 and 30 June 2011 to EUR 4 753 million, representing 56% of the total balance sheet. The company’s net debt position decreased by EUR 107 million to EUR 1 418 million compared with December 2010, mainly impacted by the dividend payment on the 2010 results and the perpetual bond which qualifies
as 'equity' for the Group under IFRS.

Cash flow from operating activities decreased from EUR 139 million in the first half of 2010 to EUR 78 million in the same period of 2011. This is resulting from higher trade receivables and a reduction of trade and other payables and was impacted by one-time items. The cash out-flow from investing activities is EUR 50 million after an out-flow of EUR 17 million in the first six months of 2010, showing the higher spending in tangible and intangible assets. Cash out-flow from financing activities of EUR 184 million (after an in-flow of EUR 275 million in 2010) is derived from the payment of the dividend, the purchase of treasury shares, the repayment of debt, partially compensated by the issuing of a perpetual bond.

R&D update central nervous system (CNS)
For the epilepsy medicine Vimpat® (lacosamide), the U.S.-monotherapy Phase 3 programme in partial-onset seizures is on track, with first results expected in Q2 2013. A Phase 3 programme is also ongoing as planned across Europe for Vimpat® as monotherapy. Headline results are expected in Q4 2014. First results from a Vimpat® Phase 2 clinical trial for adjunctive therapy in primary generalised tonic-clonic seizures (PGTCS) are expected in Q4 2011.

A Phase 3 study evaluating brivaracetam as adjunctive therapy in epilepsy is ongoing with headline results expected in the first half of 2013.

In line with the requirements of the FDA, UCB is developing a room temperature stable patch formulation of Neupro® (rotigotine) for the treatment of Parkinson's disease (PD) and restless legs syndrome. UCB aims to make the patch available to U.S. patients during 2012, subject to regulatory approval. UCB's partner in Japan, Otsuka Pharmaceutical reported in June 2011 positive Phase 3 results for Neupro® in advanced PD. The results showed the efficacy and safety and were presented at the Movement Disorders Society 15th International Congress of Parkinson’s Disease and Movement Disorders in June 2011. The programme was conducted in Japan as a double-blind, double dummy controlled study between rotigotine transdermal patch, ropinirole oral tablets and placebo. It involved 420 patients with advanced stage PD. Filing with the Japanese authorities is expected by the first quarter 2012. In 2002, Otsuka acquired the exclusive development and marketing rights to Neupro® for the Japanese market.

In March 2011, the Committee for Medicinal Products for Human Use (CHMP) of the European Medicines Agency (EMA) informed UCB that Xyrem® (sodium oxybate) will not be recommended as a treatment for fibromyalgia syndrome in adults.

R&D update immunology
Two phase 3 studies of Cimzia® (certolizumab pegol) for the treatment of rheumatoid arthritis (RA) in Japan were completed positively ahead of plan; both trials met their primary endpoints. Submission of an application for regulatory approval to the Japanese authorities is under preparation in collaboration with UCB's partner, Otsuka. The filing with the Japanese authorities is expected by March 2012.

In May 2011, UCB announced its plan to launch the first industry sponsored anti-TNF head-to-head study that will assess the relative efficacy of Cimzia® and Humira® (adalimumab) for certain predetermined parameters in the treatment of moderate to severe rheumatoid arthritis (RA). The study will include a 12 week response-based therapeutic decision and assess the impact of an early response and decision on long-term (104 weeks) clinical and patient outcomes. This trial is scheduled to start during the fourth quarter 2011.

The Phase 3 trials for Cimzia® in psoriatic arthritis and ankylosing spondylitis are on track with headline results expected at end of 2011. A Phase 3 trial in juvenile rheumatoid arthritis is under discussion with U.S. and EU regulators to finalise the study design.

Recruitment for the Phase 3 trials (EMBODY™ 1 and EMBODY™ 2) for epratuzumab in patients with moderate to severe systemic lupus erythematosus (SLE) is ongoing as planned. First results are expected in the first half of 2014.
CDP7851 ("sclerostin antibody" / AMG 785), a novel therapy for bone loss disorders had positive top-line results from the Phase 2 clinical study comparing CDP7851 to placebo in post-menopausal women with low bone mineral density for the treatment of post-menopausal osteoporosis (PMO). The Phase 3 programme will start upon completion of consultations with the regulatory authorities in the U.S. and EU. Two Phase 2 studies, one in tibia and the other one in hip fracture healing, are ongoing with first headline results expected in 2012. Amgen and UCB are collaborating for the development of CDP7851/AMG 785 for the treatment of bone-related conditions, including PMO and fracture healing.

A Phase 2b programme for olokizumab (anti-IL 6) being developed for the treatment of moderate to severe rheumatoid arthritis (RA) is currently recruiting. Headline results are expected in the third quarter of 2012.

Outlook 2011 update
UCB's financial results in 2011 are expected to be driven by the continued growth of Cimzia®, Vimpat® and Neupro® as well as by the effects of the patent expiries for Keppra®. Based on the half year financial report and the company's expectations for the remainder of the financial year 2011, revenue 2011 is anticipated at approximately EUR 3.1 billion. Recurring EBITDA and core EPS are expected at the upper end of the range EUR 650 - 680 million and EUR 1.60 -1.70 respectively.

HY 2011 – Financial highlights
A full financial report on the consolidated results is available on the UCB website:
http://www.ucb.com/investors/calendar/2011

“The statutory auditor has issued an unqualified review report dated 28 July 2011 on the company’s condensed consolidated interim financial statements as of and for the six month period ended 30 June 2011, and has confirmed that the accounting data reported in the press release is consistent, in all material respects, with the accounts from which it has been derived.”
1 Except for the net financial debt, where 2010 relates to the situation as published in the audited consolidated financial statements as at 31 December 2010.
2 Adjusted for after-tax impact of non-recurring, one-off items and after-tax contribution from discontinued operations.

29 July 2011 at 14.00 (CET) – Analysts' and investors' conference call/ Webcast
Find the link to the webcast or dial-in details for the conference call on http://www.ucb.com/investors/calendar/2011

About UCB
UCB, Brussels, Belgium (www.ucb.com) is a global biopharmaceutical company focused on the discovery and development of innovative medicines and solutions to transform the lives of people living with severe diseases of the immune system or of the central nervous system. With more than 8,000 people in about 40 countries, the company generated revenue of EUR 3.2 billion in 2010. UCB is listed on Euronext Brussels (symbol: UCB).

UCB Forward-Looking Statements
This press release contains forward-looking statements based on current plans, estimates and beliefs of management. All statements, other than statements of historical fact, are statements that could be deemed forward-looking statements, including estimates of revenues, operating margins, capital expenditures, cash, other financial information, expected legal, political, regulatory or clinical results and other such estimates and results. By their nature, such forward-looking statements are not guarantees of future performance and are subject to risks, uncertainties and assumptions which could cause actual results to differ materially from those that may be implied by such forward-looking statements contained in this press release. Important factors that could result in such differences include: changes in general economic, business and competitive conditions, the inability to obtain necessary regulatory approvals or to obtain them on acceptable terms, costs associated with research and development, changes in the prospects for products in the pipeline or under development by UCB, effects of future judicial decisions or governmental investigations, product liability claims, challenges to patent protection for products or product candidates, changes in laws or regulations, exchange rate fluctuations, changes or uncertainties in tax laws or the administration of such laws and hiring and retention of its employees. UCB is providing this information as of the date of this press release and expressly disclaims any duty to update any information contained in this press release, either to confirm the actual results or to report a change in its expectations. 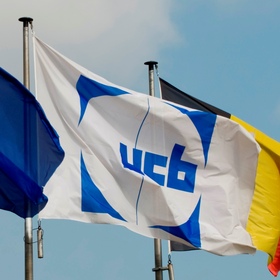 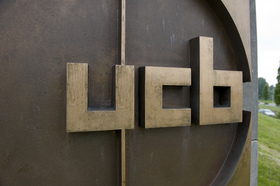 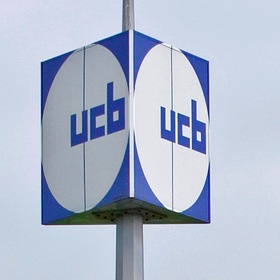