UCB continues to deliver on its growth strategy 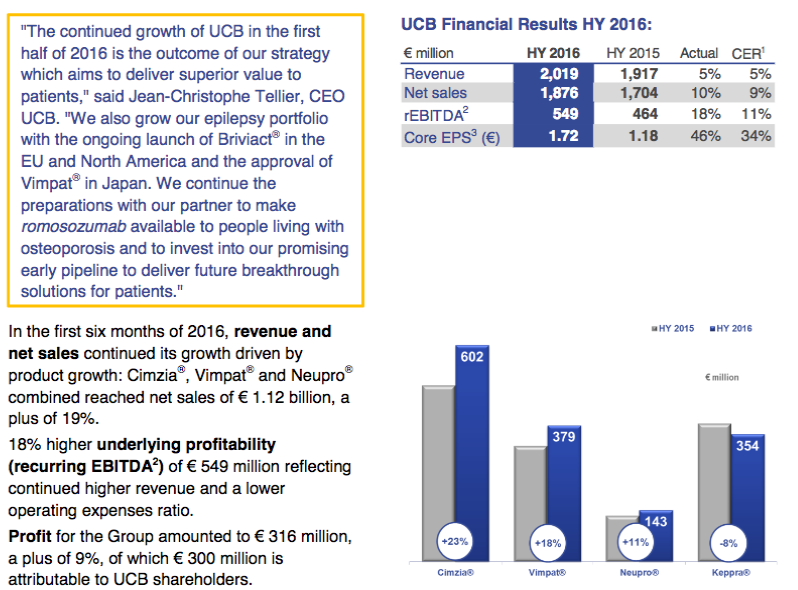 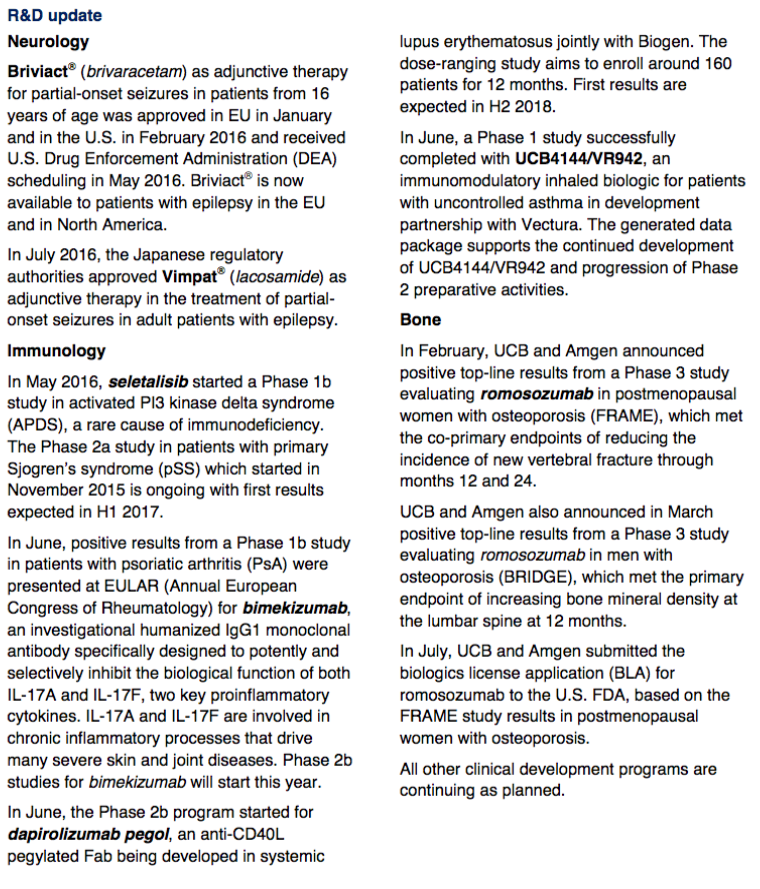 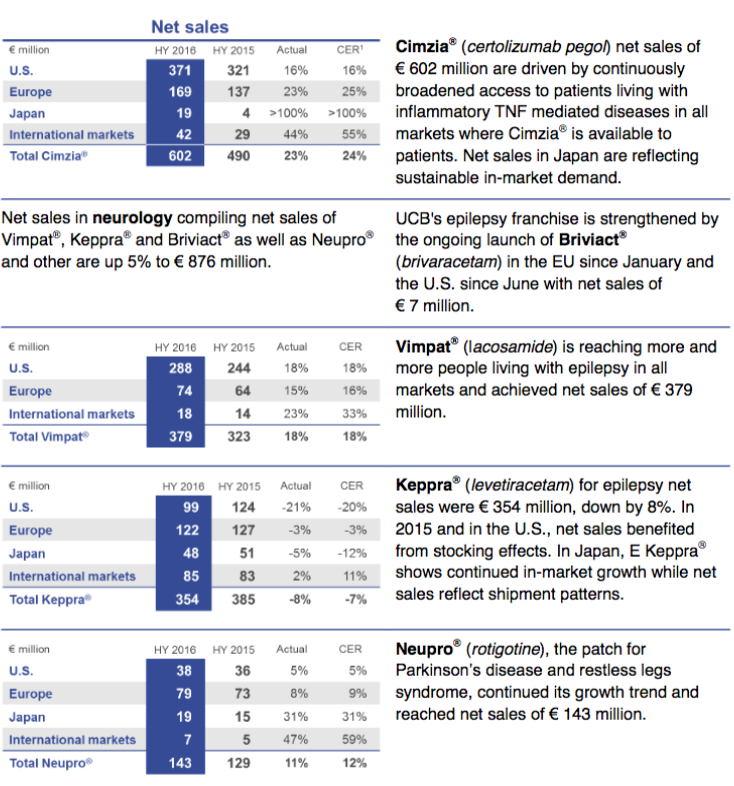 Non-recurring income was € 50 million after € 80 million, a gain from the divestiture of UCB's nitrates established brands (€ 75 million) offset with an impairment of oncology molecules and other non-recurring charges. Net financial expenses increased to € 65 million from € 47 million, which was driven by an impairment of the Lannett warrants received in connection with the Kremers Urban divestiture in November 2015. Income tax expenses were € 91 million reflecting an average tax rate on recurring activities of 25%. Profit/loss from discontinued operations, reflecting the divestiture and activities respectively of Kremers Urban, reached a loss of € 9 million after a profit of € 28 million in 2015. In November 2015, the divestiture of UCB's U.S. specialty generics business, Kremers Urban, to Lannett was successfully closed.

Core earnings per share, which reflect profit attributable to UCB shareholders after tax effects of non-recurring items, financial one-offs and amortization of intangibles, reached € 1.72 per share based on 188 million weighted average shares outstanding from € 1.18 per share based on 192 million shares in HY 2015. (+46%; +34% CER) 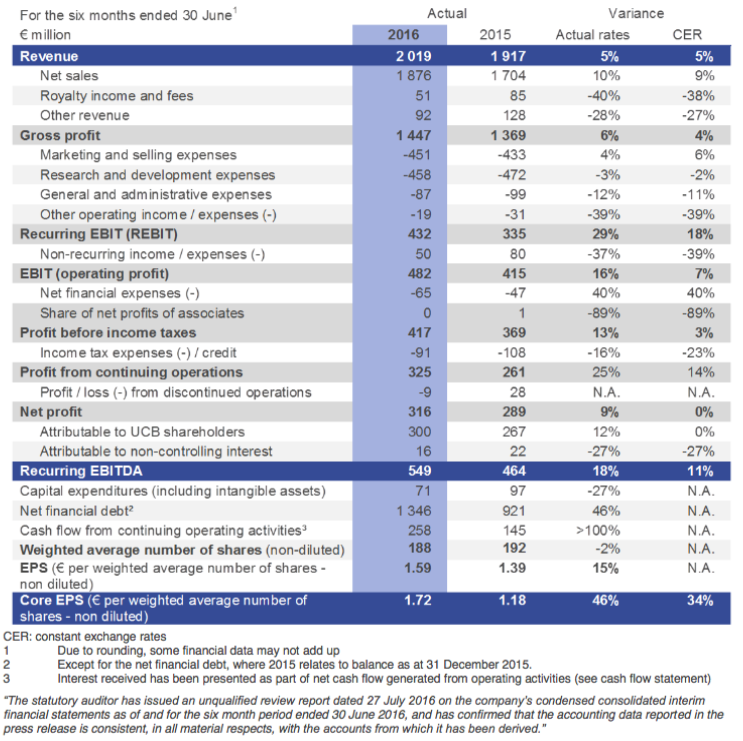 Check out our New IR App on

Forward looking statements
This press release contains forward-looking statements based on current plans, estimates and beliefs of management. All statements, other than statements of historical fact, are statements that could be deemed forward-looking statements, including estimates of revenues, operating margins, capital expenditures, cash, other financial information, expected legal, political, regulatory or clinical results and other such estimates and results. By their nature, such forward-looking statements are not guarantees of future performance and are subject to risks, uncertainties and assumptions which could cause actual results to differ materially from those that may be implied by such forward-looking statements contained in this press release. Important factors that could result in such differences include: changes in general economic, business and competitive conditions, the inability to obtain necessary regulatory approvals or to obtain them on acceptable terms, costs associated with research and development, changes in the prospects for products in the pipeline or under development by UCB, effects of future judicial decisions or governmental investigations, product liability claims, challenges to patent protection for products or product candidates, changes in laws or regulations, exchange rate fluctuations, changes or uncertainties in tax laws or the administration of such laws and hiring and retention of its employees.

Additionally, information contained in this document shall not constitute an offer to sell or the solicitation of an offer to buy any securities, nor shall there be any offer, solicitation or sale of securities in any jurisdiction in which such offer, solicitation or sale would be unlawful prior to the registration or qualification under the securities laws of such jurisdiction. UCB is providing this information as of the date of this document and expressly disclaims any duty to update any information contained in this press release, either to confirm the actual results or to report a change in its expectations.

There is no guarantee that new product candidates in the pipeline will progress to product approval or that new indications for existing products will be developed and approved. Products or potential products which are the subject of partnerships, joint ventures or licensing collaborations may be subject to differences between the partners. Also, UCB or others could discover safety, side effects or manufacturing problems with its products after they are marketed.
Moreover, sales may be impacted by international and domestic trends toward managed care and health care cost containment and the reimbursement policies imposed by third-party payers as well as legislation affecting biopharmaceutical pricing and reimbursement.