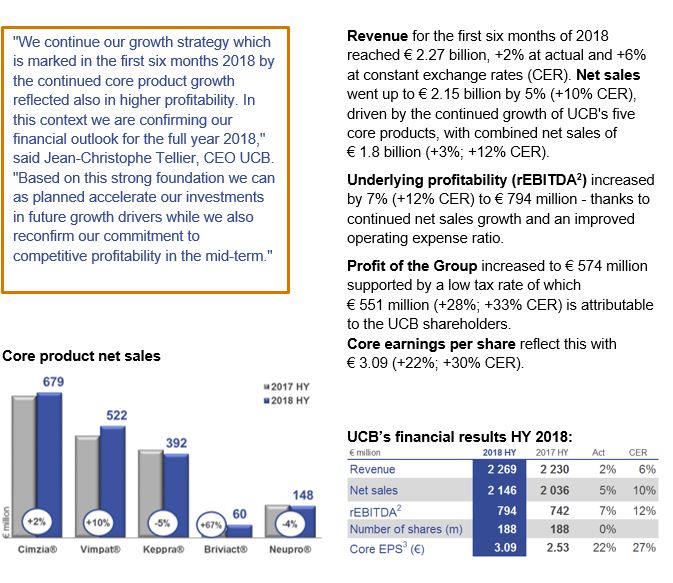 R&D update
Neurology - In April, UCB agreed to acquire midazolam nasal spray (USL261) from Proximagen and closed on the acquisition in June. USL261 is a nasally administered investigational midazolam formulation intended as a rescue treatment of acute repetitive seizures in patients with epilepsy. The new drug application was submitted in the U.S. in May following previous orphan drug status and fast-track designation by the FDA.
In May, Briviact® (brivaracetam) oral formulations were approved in the U.S. indicated as monotherapy and adjunctive therapy in the treatment of partial onset (focal) epileptic seizures in patients age four years and older.
In June, the Committee for Medicinal Products for Human Use (CHMP) of the European Medicines Agency adopted a positive opinion for Briviact® to extend the therapeutic indication to include adjunctive therapy in the treatment of partial onset seizures with or without secondary generalization in patients with epilepsy from 4 years of age.
Immunology - In March, UCB announced the filing of Cimzia® (certolizumab pegol) with the State Drug Administration (SDA, former CFDA) in China for the treatment of moderate-to-severe rheumatoid arthritis. In June, the SDA granted priority review.
In April, the European Committee for Medicinal Products for Human Use (CHMP) recommended approval of a label extension for Cimzia®, to include a new indication in adult patients with moderate-to-severe plaque psoriasis. The European Commission endorsed this in June.
In May, Cimzia® was approved for adults with moderate-to-severe plaque psoriasis in the U.S. Also in May, UCB announced positive topline results from C-AXSPAND, a Phase 3 placebo controlled study to investigate the efficacy of Cimzia® on the signs and symptoms of active axial spondyloarthitis (axSpA) in patients without x-ray evidence of ankylosing spondylitis (AS).
During the course of the first six months of 2018, further studies with bimekizumab in moderate to severe psoriasis were initiated. Out of the ongoing three Phase 3 studies, two include an active comparator, namely ustekinumab, and adalimumab. Results are expected by the end of 2019. An additional Phase 3b study to compare bimekizumab directly with secukinumab has been initiated in June. The comparative studies have been designed to demonstrate superiority over active comparators on robust endpoints.
The Phase 3 programs for bimekizumab for psoriatic arthritis and ankylosing spondyloarthitis are expected to start by the end of 2018.
In July, a full evaluation of early-stage clinical studies of seletalisib in Sjörgen’s syndrome and activated PI3K Delta Syndrome (APDS) showed positive results and no new safety signal was observed. However, in light of its other upcoming R&D investments and as part of its regular portfolio prioritization, UCB has decided to deprioritize further internal development of seletalisib.
Bone - In July, UCB and Amgen announced the resubmission of the Biologics License Application to the U.S. Food and Drug Administration (FDA) for Evenity™ (romosozumab), an investigational monoclonal antibody for the treatment of osteoporosis in postmenopausal women at high risk for fracture. Evenity™ increases bone formation and reduces bone resorption simultaneously to increase bone mineral density (BMD), and reduce the risk of fracture.
Net sales 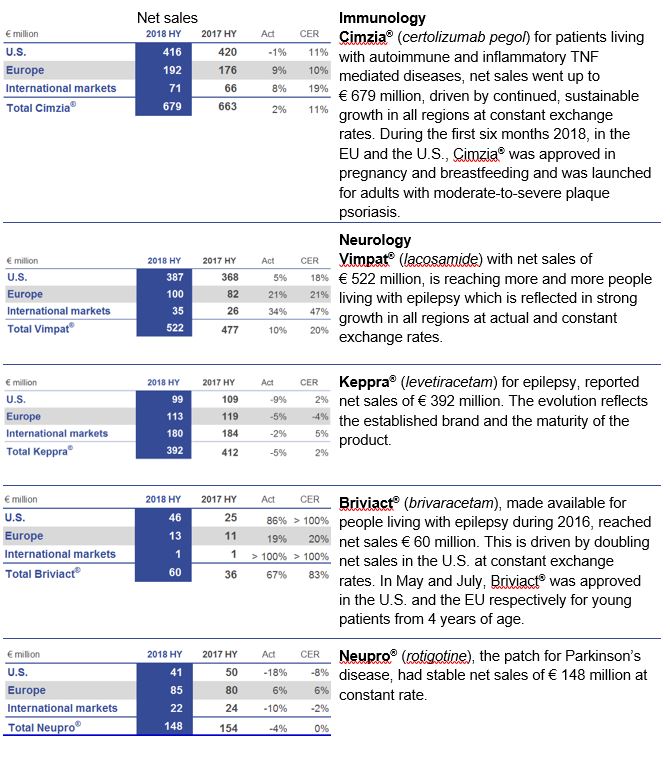 Revenue and net sales in the first six months of 2018 reached € 2 269 million (+2%; +6% at constant exchange rates (CER)) and € 2 146 million (+5%; +10% CER) respectively. Adjusted for the one-time other revenue in 2017, the increase of revenue was 4% (+9% CER). This growth was especially driven by the continued performance of UCB’s core products Cimzia®, Vimpat® and Briviact®. Royalty income and fees decreased to € 56 million from € 58 million. Other revenue reached € 67 million from € 136 million. The first six months 2017 benefitted from the one-time other revenue of € 56 million for out-licensing of the over-the-counter allergy drug Xyzal® (levoceterizine) in the U.S.
Gross profit reached € 1 696 million reflecting a stable gross margin of 75%.
Operating expenses reached € 1 039 million (-1%; +4% CER) benefiting from expense phasing and reflecting 5% lower marketing and selling expenses of € 442 million, 5% higher research and development expenses of € 500 million and 5% lower general and administrative expenses of € 88 million. This resulted in an improved operating expense ratio (in relation to revenue) of 46% down from 47%.
Underlying profitability – rEBITDA2- reached € 794 million, an increase from € 742 million (+7%; +12% CER) driven by continued net sales growth and an improved operating expense ratio.
Non-recurring expenses were € 19 million after € 1 million income in 2017 due to the income from currency translations as a result of the liquidation of legal entities.
Net financial expenses decreased to € 46 million from € 55 million.
Income tax expenses were € 56 million compared to € 114 million in June 2017. The average effective tax rate on recurring activities was 9% compared to 20% in the same period of last year. This low tax rate was driven by phasing of expenses and a late windfall of the U.S. tax reform.
Profit of the Group benefited also from the low tax rate and increased to € 574 million (from € 451 million) of which € 551 (+28%; +33% CER) million is attributable to the UCB shareholders and € 23 million to non-controlling interests.
Core earnings per share, which reflect profit attributable to UCB shareholders, adjusted for the after-tax impact of non-recurring items, the financial one-offs, the after-tax contribution from discontinued operations and the net amortization of intangibles linked to sales, reached € 3.09 (+22%; +30% CER) based on 188 million weighted average shares outstanding.
Outlook 2018 confirmed - UCB confirms its expectations of continued growth of its core products driving company growth. 2018 revenue is expected to reach approximately € 4.5 – 4.6 billion.
Recurring EBITDA in the range of € 1.3 – 1.4 billion.
Core earnings per share are therefore expected in the range of € 4.30 – 4.70 based on an average of 188 million shares outstanding.
HY 2018 – Financial highlights
Find the HY financial reports on UCB website: http://www.ucb.com/investors/Download-center

UCB will host a conference call/video webcast at 08.00 (EDT) / 13.00 (BST) 14.00 (CEST).
Details are available on https://www.ucb.com/investors/UCB-financials/Half-year-financial-results.
For Further Information
Investor Relations
Antje Witte
Investor Relations, UCB
T +32.2.559.94.14 antje.witte@ucb.com
Isabelle Ghellynck,
Investor Relations, UCB
T+32.2.559.9588, isabelle.ghellynck@ucb.com
Corporate Communications
France Nivelle
Global Communications, UCB
T +32.2.559.9178 france.nivelle@ucb.com
Laurent Schots
Media Relations, UCB
T+32.2.559.92.64  Laurent.schots@ucb.com
Check out our IR App on the Apple App Store and Google Play
About UCB
UCB, Brussels, Belgium (www.ucb.com) is a global biopharmaceutical company focused on the discovery and development of innovative medicines and solutions to transform the lives of people living with severe diseases in neurology and immunology. With more than 7 500 people in approximately 40 countries, the company generated revenue of € 4.5 billion in 2017. UCB is listed on Euronext Brussels (symbol: UCB). Follow us on Twitter: @UCB_news
Forward looking statements
This press release contains forward-looking statements based on current plans, estimates and beliefs of management. All statements, other than statements of historical fact, are statements that could be deemed forward-looking statements, including estimates of revenues, operating margins, capital expenditures, cash, other financial information, expected legal, political, regulatory or clinical results and other such estimates and results. By their nature, such forward-looking statements are not guarantees of future performance and are subject to risks, uncertainties and assumptions which could cause actual results to differ materially from those that may be implied by such forward-looking statements contained in this press release. Important factors that could result in such differences include: changes in general economic, business and competitive conditions, the inability to obtain necessary regulatory approvals or to obtain them on acceptable terms, costs associated with research and development, changes in the prospects for products in the pipeline or under development by UCB, effects of future judicial decisions or governmental investigations, product liability claims, challenges to patent protection for products or product candidates, changes in laws or regulations, exchange rate fluctuations, changes or uncertainties in tax laws or the administration of such laws and hiring and retention of its employees.
Additionally, information contained in this document shall not constitute an offer to sell or the solicitation of an offer to buy any securities, nor shall there be any offer, solicitation or sale of securities in any jurisdiction in which such offer, solicitation or sale would be unlawful prior to the registration or qualification under the securities laws of such jurisdiction. UCB is providing this information as of the date of this document and expressly disclaims any duty to update any information contained in this press release, either to confirm the actual results or to report a change in its expectations.
There is no guarantee that new product candidates in the pipeline will progress to product approval or that new indications for existing products will be developed and approved. Products or potential products which are the subject of partnerships, joint ventures or licensing collaborations may be subject to differences between the partners. Also, UCB or others could discover safety, side effects or manufacturing problems with its products after they are marketed.
Moreover, sales may be impacted by international and domestic trends toward managed care and health care cost containment and the reimbursement policies imposed by third-party payers as well as legislation affecting biopharmaceutical pricing and reimbursement.