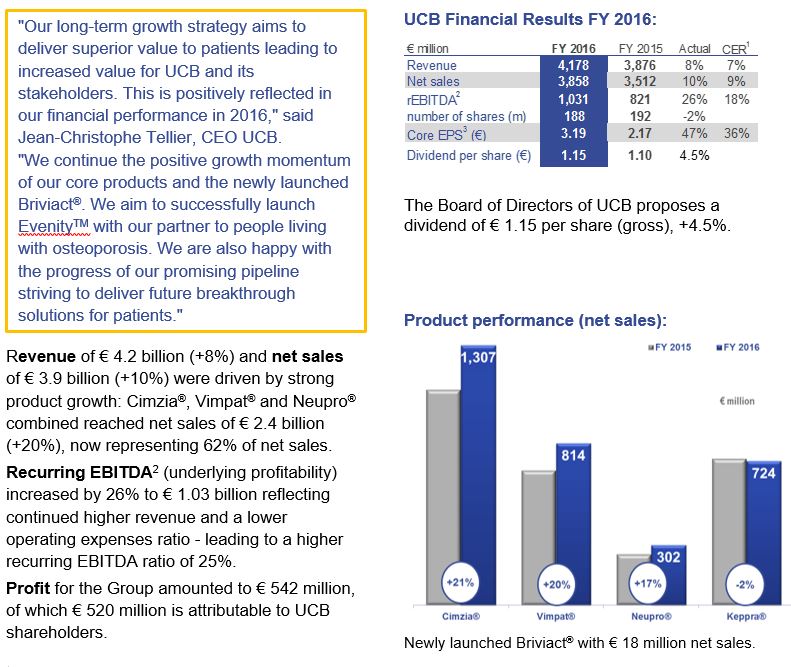 Neurology
In January, 2017, UCB filed a supplemental New Drug Application with the U.S. authorities for Briviact® (brivaracetam) as monotherapy in the treatment of partial-onset seizures in patients 16 years of age and older with epilepsy.

In December 2016, the European Commission approved a license extension for Vimpat® (lacosamide) for use as monotherapy in the treatment of partial-onset seizures in adult and adolescent patients with epilepsy, following the filing in January 2016.
The phase 2a study with UCB0942 - aimed at highly drug resistant epilepsy patients, who failed four anti-epileptic drugs and have at least four seizures/week - showed positive top line results and will progress into further development. Detailed results will be presented at future scientific meetings.

Immunology
In October and December 2016, UCB and its partner Dermira announced topline results from CIMPASI-2 and CIMPASI-1, two Phase 3, multi-center, placebo-controlled clinical trials evaluating the efficacy and safety of Cimzia® (certolizumab pegol) in adult patients with moderate-to-severe chronic plaque psoriasis. These studies were completed in January 2017, with the announcement of positive topline results from CIMPACT, a Phase 3, multi-center, placebo-controlled and active-controlled clinical trial evaluating the efficacy and safety of CIMZIA®. The submissions of marketing applications based on these three phase 3 studies to regulatory authorities are expected in the third quarter of 2017.

UCB continues to advance the science and expand availability of data bringing valuable information to women with autoimmune disease who are planning to build a family. This includes two phase 4 studies which recently provided positive results, CRADLE and CRIB: During the fourth quarter 2016, UCB presented at various scientific congresses the positive results from a multicenter study evaluating the concentration of Cimzia® in mature breast milk of lactating mothers (CRADLE). In January 2017, the second study, a multicenter study evaluating the transfer of Cimzia® from the mother to the infant via the placenta (CRIB), completed and had positive topline results. These results which will be presented at an upcoming scientific meeting strengthen previous data on women treated with Cimzia® during pregnancy and the effect on their newborn infants, and will be submitted to the regulatory authorities in Q2 2017.

In June, positive results from a Phase 1b study in patients with psoriatic arthritis were presented for bimekizumab. Consequently, UCB started the phase 2b program for bimekizumab in various indications: in August 2016, in psoriasis with first results expected in Q3 2017, and in October one study in psoriatic arthritis and one in ankylosing spondylitis, both with first results expected in Q3 2018.

Bone
In July, UCB and Amgen submitted the biologics license application (BLA) for Evenity™ (romosozumab) to the authorities in the U.S. and thereafter Canada.

In December, UCB and Amgen submitted an application seeking marketing approval of Evenity™ for the treatment of osteoporosis for those at high risk of fracture for review to the Pharmaceuticals and Medical Devices Agency (PMDA) in Japan.
All other clinical development programs are continuing as planned.

For a comprehensive full year R&D update, please see the respective section in the Annual Report 2016. 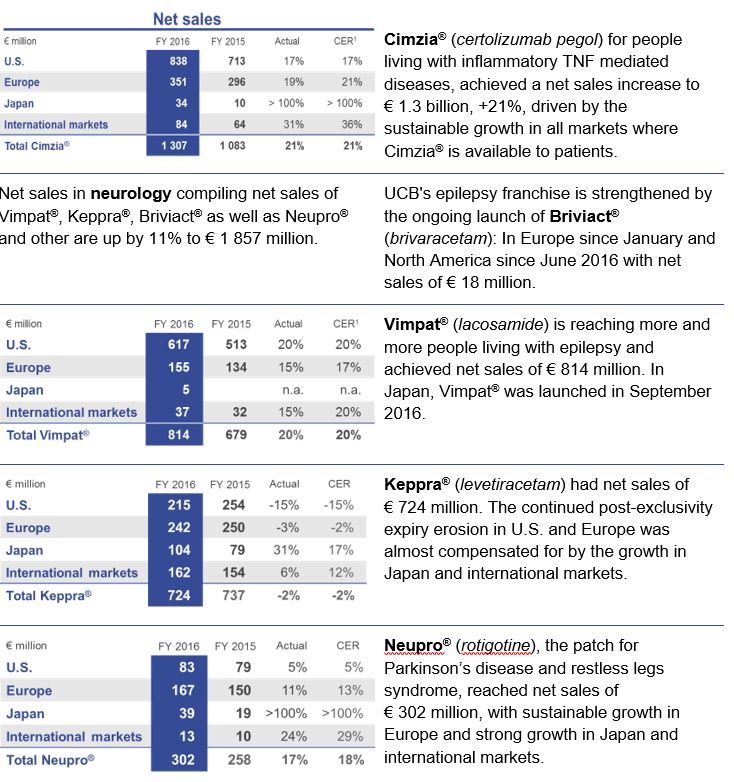 Revenue, encompassing net sales, royalty income and other income, reached € 4.2 billion (+8%; +7%CER). This growth was driven by the 10% increase in net sales to € 3 858 million (+9%CER) thanks to continued core product growth.

Royalty income went down to € 125 million (-29%; -24%CER) primarily due to patent expirations and divestiture. Other revenue went up to € 195 million (+4%; +5%CER), mainly due to higher volume in contract manufacturing, offset by lower milestone and other payments.

Gross profit increased to € 2 976 million (+9%, +8%CER), due to the net sales growth and improved product mix. Operating expenses increased by only 2% reaching € 2 180 million (+3% CER). This reflects 4% higher marketing and selling expenses of € 940 million, 2% lower research and development expenses of € 1 020 million and 5% lower general and administrative expenses of € 184 million.

Non-recurring income was € 80 million after expenses of € 55 million, reflecting divestitures of UCB's established brands nitrates as well as the divestiture of venlafaxine ER in the U.S.

Net financial expenses increased to € 112 million (+16%; +17%CER), which was driven by an impairment of the Lannett warrants received in connection with the Kremers Urban divestiture in November 2015. Income tax expenses were € 199 million reflecting an average tax rate on recurring activities of 26%. Profit/loss from discontinued operations, reached a loss of € 23 million after a profit of € 359 million reflecting the divestiture and activities respectively of UCB's U.S. specialty generics business, Kremers Urban, in 2015.

Core earnings per share, which reflect profit attributable to UCB shareholders after tax effects of non-recurring items, financial one-offs and amortization of intangibles, reached € 3.19 per share based on 188 million weighted average shares outstanding from € 2.17 per share based on 192 million shares in 2015.

Outlook 2017- Based on its growth strategy, UCB expects 2017 revenue to reach € 4.25 - 4.35 billion; recurring EBITDA2 should increase to € 1.15 – 1.20 billion. Core earnings per share are expected in the range of € 3.70 – 4.00 based on an expected average of 188 million shares outstanding. This outlook 2017 is calculated on the same basis as the actual figures for 2016 and 2015 with the exception of the following: Conservatively taking into account the expected restrained effect on revenue from the implementation of IFRS 15 in 2017 and less net sales from established brands due to divestitures (nitrates, venlafaxine ER) during 2016.

About UCB
UCB, Brussels, Belgium (www.ucb.com) is a global biopharmaceutical company focused on the discovery and development of innovative medicines and solutions to transform the lives of people living with severe diseases of the immune system or of the central nervous system. With more than 7 700 people in approximately 40 countries, the company generated revenue of € 4.2 billion in 2016. UCB is listed on Euronext Brussels (symbol: UCB). Follow us on Twitter: @UCB_news