Brussels (Belgium), 31 July 2015 – 7:00 (CEST) – regulated information –
"We continue our growth path with strong growth from Cimzia®, Vimpat® and Neupro®, now accounting for 55% of UCB's net sales, and we are tracking well towards our profitability target of a 30% recurring EBITDA ratio in 2018," said Jean-Christophe Tellier, CEO UCB. "At the same time, we are very excited about the progress in our early pipeline, now encompassing seven projects in Phase 2 and 1. Our late stage development pipeline with brivaracetam under regulatory review and first Phase 3 results for romosozumab expected next year is tracking well. Although we are disappointed with the results from the Phase 3 studies for epratuzumab, our commitment to the lupus community remains. We are focused on developing new therapies for the treatment of immunological conditions."

Net sales of the anti-epileptic drug Keppra® (levetiracetam) were € 385 million (+14%; +2% CER). The continued post-exclusivity erosion in Europe was compensated by growth in other markets.

Gross profit went up to € 1 369 million (+24%, +13% CER), due to the net sales growth and improved product mix – the core products now representing 55% of UCB's total net sales. Operating expenses reached € 1 034 million, (+14%; +6% CER), showing a lower growth rate than the revenue line with reflecting marketing and selling expenses of € 433 million, research and development expenses of € 472 million and general and administrative expenses of € 99 million.

Underlying profitability -recurring EBITDA- reached € 464 million (+49%; +31% CER), driven by tailwind from foreign exchange rates, strong net sales growth, higher gross margin and an under-proportional growth of operating expenses.
Non-recurring income was € 80 million after expenses of € 47 million in the previous period, mainly due to a gain from the divestiture of UCB's established brands in India. Net financial expenses improved to € 47 million from € 67 million, mainly driven by lower interest expenses due to the pay-down of the outstanding retail bond which matured November 2014. Income tax expenses were € 108 million reflecting an average tax rate on recurring activities of 33% compared to 19% last year.

Core earnings per share, which reflect net profit attributable to UCB shareholders after tax effects of non-recurring items, financial one-offs and amortization of intangibles, reached € 1.18 per share based on 192 million weighted average shares outstanding from € 0.96 per share based on 191 million shares.

Financial outlook 2015 adjusted to reflect exchange rate effects
UCB expects the continued growth of Cimzia®, Vimpat®, Neupro® to drive overall company growth. 2015 revenue is now expected in the range of € 3.65 – 3.75 billion; recurring EBITDA is now expected at the higher end of the previous range of €710-740 million. Core earnings per share (EPS) are expected in the range of € 1.90 – 2.05 based on an average of 192 million shares outstanding.

R&D update
In April, the Phase 3 program for Vimpat® (lacosamide) in primary generalized tonic-clonic seizures (PGTCS) has started; first headline results are expected in 2019.
In June, Vimpat® as adjunctive therapy in the treatment of adult patients with partial-onset seizures (POS) was filed with the Japanese agency.

In July, UCB0942 (PPSI), a small molecule in development for highly drug resistant epilepsy, started the Phase 2 proof of concept study; first results are expected Q4 2016.
In May, in addition to the ongoing Phase 2a trial with bimekizumab in psoriatic arthritis, a Phase 2a study to evaluate bimekizumab (UCB4940) in combination with Cimzia® in rheumatoid arthritis (RA) started. Headline results are expected H1 2017.

In June, The C-EARLY™ first phase (at 52 weeks) showed that adding Cimzia® to optimized methotrexate achieved sustained remission and low disease activity in this at risk patient population. Based on the results of this study, UCB submitted a regulatory application to the European Medicines Agency for an extension of the Cimzia® indication in RA.
Also in June, UCB's partnership with Vectura moved forward. The new molecular entity VR942 / UCB4144 entered Phase 1 in healthy volunteers and patients with asthma.

In July, UCB announced that the Phase 3 studies for epratuzumab in Systemic Lupus Erythematosus (SLE) did not meet the primary clinical efficacy endpoints. Treatment response in patients who received epratuzumab in addition to standard therapy was not statistically significantly higher than those who received placebo in addition to standard therapy. A high level review of the safety data did not identify any new safety concerns.

All other clinical development programs are continuing as planned. 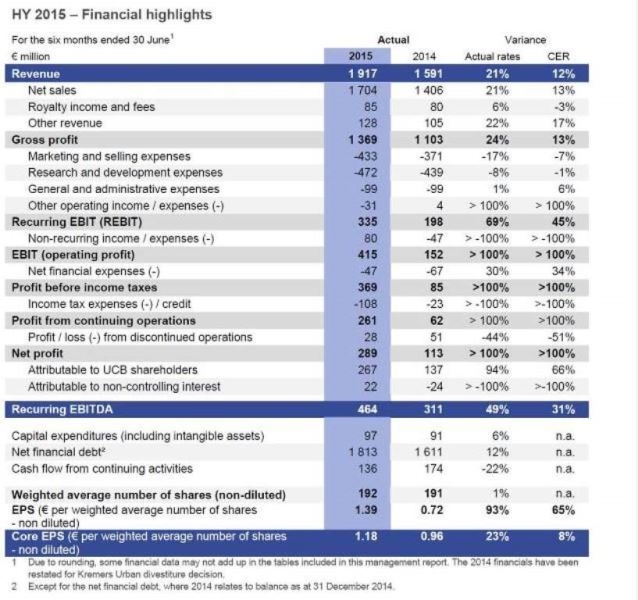 "The statutory auditor has issued an unqualified review report dated 30 July 2015 on the company’s condensed consolidated interim financial statements as of and for the six month period ended 30 June 2015, and has confirmed that the accounting data reported in the press release is consistent, in all material respects, with the accounts from which it has been derived.”

A full financial report on the consolidated results is available on the UCB website: http://www.ucb.com/investors/Financials/Interim-reports