BRUSSELS/CHICAGO, 8th November 2011 – UCB today announced data from two studies of Japanese rheumatoid arthritis (RA) patients, which showed treatment with Cimzia® (certolizumab pegol) was associated with a rapid and sustained clinical response in patients unresponsive to standard methotrexate (MTX) therapy (J-RAPID) or either unable to take or unresponsive to MTX (HIKARI).1,2 The results are the first to assess the efficacy of Cimzia® up to 24 weeks in a Japanese patient population, and were presented during the American College of Rheumatology’s (ACR) 2011 Annual Scientific Meeting in Chicago, November 5-9.

In the J-RAPID study, certolizumab pegol plus MTX was associated with a rapid and sustained reduction in RA signs and symptoms compared to placebo plus MTX in Japanese RA patients with an inadequate response to MTX.1 In a second study (HIKARI) of Japanese patients in whom MTX was not tolerated, treatment with certolizumab pegol demonstrated a significantly improved clinical response compared to placebo.2 In the HIKARI study, the positive clinical response was observed both in patients receiving certolizumab pegol as monotherapy and in those receiving concomitant disease modifying antirheumatic drugs (DMARDs) other than MTX.2

“While methotrexate remains an important standard therapy for rheumatoid arthritis patients, it is essential that physicians have options when it is no longer effective alone, or when patients are unable to take it,” said lead investigator Professor Kazuhiko Yamamoto, Department of Allergy and Rheumatology, Graduate School of Medicine, University of Tokyo. “Certolizumab pegol has been studied extensively among a broad range of RA patients and this data from Japanese patient populations reinforces both the breadth of experience and importance of certolizumab pegol as a potential treatment for patients with an inadequate response to standard therapy.”

In the HIKARI study, RA patients in whom MTX could not be administered were randomised to either certolizumab pegol 200mg (n=116) every two weeks, following an induction dose of 400mg at Weeks 0, 2, and 4, or placebo (n=114) with concomitant DMARDs other than MTX. ACR20 responses were significantly higher in the certolizumab pegol group than with placebo at Week 12 (67.2% vs 14.9% respectively) and Week 24 (63.8% vs 11.4%). ACR50 responses in patients treated with certolizumab pegol were significantly higher than placebo at Weeks 12 (37.9% vs 6.1%) and 24 (46.6% vs 6.1%), while ACR70 responses were also higher at Week 24 (25.9% vs 0.9%). Significant differences in ACR20 responses were seen as early as Week 1 and sustained to Week 24, compared to placebo. Importantly, these results were consistent regardless of use of concomitant DMARDs.2

“These Japanese data confirm our previous findings that Cimzia® demonstrates a rapid and sustained response in adult patients with active RA,” explained Professor Dr Iris Loew-Friedrich, Chief Medical Officer of UCB, Belgium. “This data will form an important part of our submission for Cimzia® marketing authorisation in Japan, which is scheduled for early 2012.”

UCB has a collaboration with Otsuka Pharmaceuticals for Cimzia® (certolizumab pegol) in the Japanese market.

About Otsuka Pharmaceutical Co., Ltd.
Founded in 1964, Otsuka Pharmaceutical Co., Ltd. is a global healthcare company with the corporate philosophy: 'Otsuka-people creating new products for better health worldwide.’ Otsuka researches, develops, manufactures and markets innovative and original products, with a focus on pharmaceutical products for the treatment of diseases, and consumer products for the maintenance of everyday health. Otsuka is committed to being a corporation that creates global value, adhering to high ethical standards required of a company involved in human health and life, maintaining a dynamic corporate culture, and working in harmony with local communities and the natural environment. 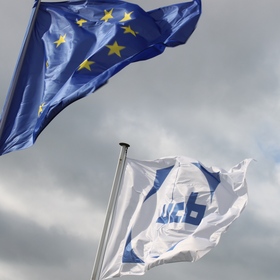