For the attention of accredited medical writers

Brussels (Belgium), December 5th, 1830 CET, 2011 – UCB today announced new findings for Vimpat® (lacosamide) that offer additional support regarding the long-term effects of the antiepileptic drug (AED) as an adjunctive therapy for adults with uncontrolled partial-onset seizures. The data demonstrate reduced seizure severity and improvements in measures of health-related quality of life (HRQoL). These and other Vimpat® data were presented at the 65th Annual Meeting of the American Epilepsy Society (AES) in Baltimore, Md.

Analyses of pooled data from open-label extensions of several Phase II/III trials showed that treatment with lacosamide was generally well-tolerated and associated with decreased partial-onset seizures for up to eight years.

“Collectively, this body of evidence showed that lacosamide reduced seizure frequency and improved health-related quality of life, as reported by patients. And these effects were maintained over a long-term basis,” said Dr. William Rosenfeld, MD, Director, The Comprehensive Epilepsy Care Center for Children and Adults, St. Louis, Mo.

Vimpat® is indicated as adjunctive therapy for the treatment of partial-onset seizures in adults with epilepsy. The most common adverse reactions reported in pivotal trials and occurring in 10 percent or more of Vimpat®-treated patients, and greater than placebo, were dizziness, headache, nausea, and diplopia. Additional important safety information for Vimpat® is available at the end of the press release.

Seizure Severity Questionnaire (SSQ) allows patients to review various aspects of their seizures, such as altered consciousness and cognitive, emotional, and physical effects.

­Patient Global Impression of Change (PGIC) is a scale that allows patients to rank how much they think their condition has changed during the treatment period of the trial. The scale ranges from 0 (much better) to 10 (much worse).

The median modal dose of lacosamide (i.e., the dose that patients used most often during the trial) was 400mg/day for a minimum treatment duration of three days up to a maximum duration of 2,913 days (~8 years). The median maximum daily dose was 500mg/day. However, the maximum FDA-approved dose for Vimpat® is 400 mg/day.

This analysis of pooled data from open-label extensions of three Phase II/III trials demonstrated that long-term lacosamide therapy was associated with improvements in health-related quality of life (HRQoL) and substantial reductions in seizure severity among adults with complex partial seizures (CPS) and secondary generalized partial seizures (SGPS) who responded to treatment. Improvements in HRQoL and reduction in seizure severity were greater in patients who achieved a 50 percent reduction in seizure frequency compared to individuals who did not respond to treatment.

This post-hoc analysis of pooled data from open-label extensions of three Phase II/III trials found that the impact of treatment with lacosamide on health-related quality of life (HRQoL) was dependent on the dose and sodium channel properties of the concomitant AED regimen. However, adding lacosamide up to 400 mg/day for patients taking any combination of AEDs led to generally stable HRQoL.

This analysis of pooled data from open-label extensions of three Phase III trials demonstrated that after one year of lacosamide treatment, patients reported significant improvements in seizure severity and health-related quality of life (HRQoL), including seizure worry, social functioning, and overall health state.

• For QOLIE-31:
­On average, patients reported improvements on all QOLIE-31 subscales with the exception of medication effects.
­
Significant improvements were found for seizure worry (+7.36), social functioning (+2.84), and total score (+1.66).
­
At Week 48, at least one-third of patients showed clinically meaningful improvement on all QOLIE-31 subscales, specifically seizure worry (47.7 percent) and social functioning (47.7 percent).

• For SSQ:
­At Week 48, patients reported a significant mean improvement on all SSQ subscales, including cognitive, emotional, and physical effects during and after seizures.

• For PGIC:
­A majority of patients (67.7 percent) reported improvement in their overall health state, with nearly half (46.9 percent) placed in the “very much” or “much improved” categories.

About Epilepsy
Epilepsy is a chronic neurological disorder affecting approximately 50 million people worldwide and three million people in the U.S. Anyone can develop epilepsy; it occurs across all ages, races and genders. Uncontrolled seizures and medication side effects pose challenges to independent living, learning and employment, so the goal of epilepsy treatment is seizure freedom with minimal side effects. In the U.S., more than one million patients continue to have seizures despite initial therapy, and more than 800,000 continue to have seizures despite treatment with two or more therapies. [1],[2]

About Vimpat®
Vimpat® tablets and injection were launched in the US in May 2009 as an add-on therapy for the treatment of partial-onset seizures in people with epilepsy who are aged 17 years and older. Vimpat® injection is a short-term replacement when oral administration is not feasible in these patients. Vimpat® oral solution was launched in June 2010. The availability of the oral tablets, oral solution, and intravenous (IV) injection allows for consistent treatment in a hospital setting. The most common adverse reactions occurring in greater than or equal to 10 percent of Vimpat®-treated patients, and greater than placebo, were dizziness, headache, nausea, and diplopia. Additional important safety information for Vimpat® is available at the end of the press release.

In the European Union, Vimpat® (film-coated tablets and solution for infusion) is approved as adjunctive therapy for the treatment of partial-onset seizures with or without secondary generalization in patients with epilepsy aged 16 years and older. Vimpat® solution for infusion may be used when oral administration is temporarily not feasible.

The maximum approved daily dose for Vimpat® in the European Union and the U.S. is 400 mg/day.

Important safety information about Vimpat® (C-V) in the U.S.

Warnings and Precautions
AEDs increase the risk of suicidal behavior and ideation. Patients taking Vimpat® should be monitored for the emergence or worsening of depression, suicidal thoughts or behavior, and/or any unusual changes in mood or behavior.

Patients should be advised that Vimpat® may cause dizziness, ataxia, and syncope. Caution is advised for patients with known cardiac conduction problems, who are taking drugs known to induce PR interval prolongation, or with severe cardiac disease. In patients with seizure disorders, Vimpat® should be gradually withdrawn to minimize the potential of increased seizure frequency. Multiorgan hypersensitivity reactions have been reported with antiepileptic drugs. If this reaction is suspected, treatment with Vimpat® should be discontinued.

Common Adverse Reactions
The most common adverse reactions occurring in ≥10 percent of Vimpat®-treated patients, and greater than placebo, were dizziness, headache, nausea, and diplopia.

Vimpat® (C-V) is a Schedule V controlled substance.
Vimpat® is a registered trademark used under license from Harris FRC Corporation.

Important safety information about Vimpat® in the EU and EEA

Vimpat® is indicated as adjunctive therapy in the treatment of partial-onset seizures with or without secondary generalization in patients with epilepsy aged 16 years and older. Lacosamide solution for infusion is an alternative for patients when oral administration is temporarily not feasible. Contraindications: Hypersensitivity to the active substance or any of the excipients; known second- or third-degree atrioventricular (AV) block. Special warnings and precautions for use: Treatment with lacosamide has been associated with dizziness which could increase the occurrence of accidental injury or falls. Therefore, patients should be advised to exercise caution until they are familiar with the potential effects of the medicine. Prolongations in PR interval with lacosamide have been observed in clinical studies. Cases with second- and third-degree AV block associated with lacosamide treatment have been reported in post-marketing experience. Lacosamide should be used with caution in patients with known conduction problems or severe cardiac disease such as a history of myocardial infarction or heart failure. Caution should especially be exerted when treating elderly patients as they may be at an increased risk of cardiac disorders or when lacosamide is used in combination with products known to be associated with PR prolongation. Second-degree or higher AV block has been reported in post-marketing experience. In the placebo-controlled trials of lacosamide in epilepsy patients, atrial fibrillation or flutter were not reported; however, both have been reported in open-label epilepsy trials and in post-marketing experience. Patients should be made aware of the symptoms of second-degree or higher AV block (e.g. slow or irregular pulse, feeling of lightheadedness and fainting) and of the symptoms of atrial fibrillation and flutter (e.g. palpitations, rapid or irregular pulse, shortness of breath). Patients should be counseled to seek medical advice should any of these symptoms occur. Suicidal ideation and behavior have been reported in patients treated with antiepileptic agents. Therefore patients should be monitored for signs of suicidal ideation and behaviors and appropriate treatment should be considered. Patients (and caregivers of patients) should be advised to seek medical advice should signs of suicidal ideation or behavior emerge. The solution for infusion contains sodium, which should be taken into consideration for patients on a controlled sodium diet. Effects on ability to drive and use machines: Lacosamide may have minor to moderate influence on the ability to drive and use machines. Lacosamide treatment has been associated with dizziness and blurred vision. Accordingly patients should be advised not to drive a car or to operate other potentially hazardous machinery until they are familiar with the effects of lacosamide on their ability to perform such activities. Laboratory abnormalities: Abnormalities in liver function tests have been observed in controlled trials with lacosamide in adult patients with partial-onset seizures who were taking 1-3 concomitant antiepileptic drugs. Elevations of ALT to ≥3XULN occurred in 0.7% (7/935) of lacosamide patients and 0% (0/356) of placebo patients. Multiorgan Hypersensitivity Reactions: Multiorgan hypersensitivity reactions have been reported in patients treated with some antiepileptic agents. These reactions are variable in expression but typically present with fever and rash and can be associated with involvement of different organ systems. Potential cases have been reported rarely with lacosamide and if multiorgan hypersensitivity reaction is suspected, lacosamide should be discontinued. Undesirable effects: The most common adverse reactions (≥10%) are dizziness, headache, diplopia, and nausea. Other common adverse reactions (≥1%<10%) are depression, confusional state, insomnia, balance disorder, coordination abnormal, memory impairment, cognitive disorder, somnolence, tremor, nystagmus, hypoesthesia, dysarthria, disturbance in attention, vision blurred, vertigo, tinnitus, vomiting, constipation, flatulence, dyspepsia, dry mouth, pruritus, rash, muscle spasms, gait disturbance, asthenia, fatigue, irritability, injection site pain or discomfort (specific to solution for infusion), irritation (specific to solution for infusion), fall, and skin laceration. Refer to the European Summary of Product Characteristics for other adverse reactions and full prescribing information. Date of revision: 15 November, 2011.

Abut UCB
UCB, Brussels, Belgium (www.ucb.com) is a global biopharmaceutical company focused on the discovery and development of innovative medicines and solutions to transform the lives of people living with severe diseases of the immune system or of the central nervous system. With more than 8 500 people in about 40 countries, the company generated revenue of EUR 3.2 billion in 2010. UCB is listed on Euronext Brussels (symbol: UCB). 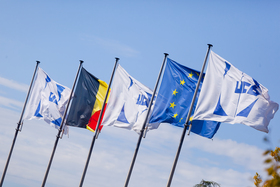