My friends were very supportive when I needed them

Jutta waited 20 years for a diagnosis and was relieved to discover she was not alone with her symptoms. When Jutta first noticed the crawling sensation in her legs, she didn’t pay it much attention as it didn’t happen very often.
A year later, just weeks before she and her husband were due to indulge their passion for botany and gardening with a trip to Costa Rica, Jutta became increasingly restless and suffered bad insomnia. She got on the aeroplane, hoping the holiday would help her relax:

“During the night flight, I began to feel a tingling and pulsing heat sensation under the soles of my feet. I became increasingly bothered by it and wanted to get up and move about. But people were sleeping and I didn’t want to disturb them. As the symptoms intensified, I felt like pulling my hairs out one-by-one. I had no choice but to get up and pace the aisles which gave me some relief.”

When she was told to return to her seat and stop disturbing the other passengers, Jutta describes the nightmare of having to sit out the flight, a prisoner in her own body.

Many people get RLS symptoms during the day, as well as at night. Sitting still for more than a few minutes became impossible for Jutta:

“ When my symptoms grew worse, going to concerts became impossible for me. I was incapable of sitting still. People would just stare, shaking their heads. I felt like a ‘strange person’ different from others, so I stopped attending concerts or events.”

“ One night he came to check on me with a bottle of champagne and took me to our garden where we sat under the stars and enjoyed our flowers.” 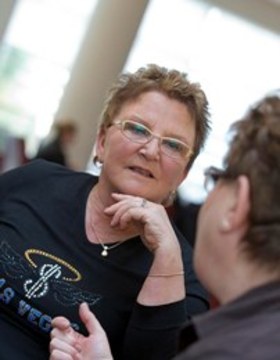