In line with its strategy, UCB expands its biotechnology base in Belgium

Brussels (Belgium), 14 September 2012 – In line with its strategy, and in preparation for the growing demand for biological medicines, UCB today inaugurated its new pilot biotechnology plant at its Braine-L’Alleud site in Belgium.

UCB’s new biologics pilot production facility was officially opened at a ceremony attended by Jean-Claude Marcourt, Vice President and Minister for the Economy of the Walloon Government and Roch Doliveux, UCB’s CEO. The event was also attended by Jean-Marc Nollet, Walloon Minister for Sustainable Development; André Antoine, Vice President and Minister for the Budget of the Walloon Government and Vincent Scourneau, Mayor of Braine-L’Alleud.

The opening of this state of the art plant is an important milestone in the growth of UCB, the patient-centric biopharma leader focusing on severe diseases of the central nervous system and immune system. The plant which will produce cell culture-based therapeutic proteins is dedicated to accelerating the availability of new biotechnology drugs for severe diseases. The plant is a pilot facility, i.e. it will focus on developing UCB’s molecules in the research and clinical trial phases. At the same time, manufacturing processes will be designed and optimised to move from development to full scale industrial production.

The facility will include multiple fermentation reactors as well as integrated laboratories and additional infrastructure to house a focused new production team.

“By reinforcing its presence in biotechnology, UCB is equipping itself for the future,” explains Roch Doliveux, CEO of UCB. “Today, 33% of drugs for human use worldwide are of biotechnological origin and represent more than half of UCB’s current R&D pipeline. With this bio pilot plant, we will more rapidly initiate clinical studies of new antibody-based therapeutics that are addressing serious unmet medical needs. ”

“Braine-L’Alleud is at the heart of UCB’s innovation strategy,” says Roch Doliveux. “ In 2011, according to the European Commission’s annual classification, UCB was the largest Belgian investor in research and development across all industries. The proactive policy followed by Belgium and its regions to stimulate pharmaceutical activity, coupled with the presence of a highly skilled workforce, is creating a favorable climate for such investments.”

The entire biotechnology pilot plant project represents an investment by UCB of more than EUR 65 million, supported by the Walloon region. The new plant is currently undergoing a validation phase, which is being carried out alongside the regulatory authorities, and it will become fully operational during the course of 2013.

The new biotechnology plant will include one hundred employees, most of whom will have received high quality training support, and covers a surface area of 5,100 m2 (including 800 m2 of laboratories). It also comprises four bioreactors with a total capacity of 3,200 liters.

UCB’s site in Braine-l’Alleud currently includes 18 buildings across a 51 hectare site. The new plant has been designed to optimize its environmental impact.

UCB (www.ucb.com) is a biopharmaceutical company based in Brussels (Belgium) which is devoted to researching and developing new drugs and innovative solutions aimed at people with severe diseases of the immune system and central nervous system. Employing more than 8,500 people in around 40 countries, the company generated a turnover of €3.2 billion in 2011. UCB is listed on the Euronext market in Brussels (symbol: UCB). 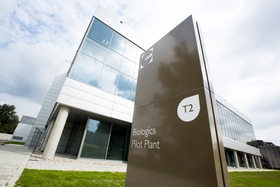