Reduced disease activity observed as early as week 8, with further improvements to week 121

Atlanta, November 9, 2010, 08:00 (EST) - UCB (EURONEXT: UCB) and U.S. based partner Immunomedics Inc. (NASDAQ:IMMU) announced that results from the phase IIB study, EMBLEM™, showed that certain doses of epratuzumab were associated with a meaningful and statistically significant* reduction in disease activity in adult patients with moderate to severe active SLE.1

The EMBLEM™ study was designed to evaluate the efficacy and safety of epratuzumab (in combination with immunosuppressants) in SLE, identify an optimal dose and regimen for further studies, and validate and analyse the performance of a new composite efficacy endpoint.

The data, which were presented today in Atlanta at the 74th Annual Scientific Meeting of the American College of Rheumatology (ACR), demonstrated that, in EMBLEM™, all epratuzumab doses, which ranged from 200mg to 3600mg cumulative dose administered during one 12-week treatment cycle, had numerically superior response rates compared to placebo at week 12. For patients receiving epratuzumab at a cumulative dose of 2400mg, there were meaningful and statistically significant reductions in SLE disease activity, with responder rates more than double those of placebo. 1

Epratuzumab was associated with a similar incidence of serious adverse events (including infections) and infusion reactions compared to placebo.

Additionally, based on analysis of improvement in BILAG 2004 by body system in EMBLEM™, most patients had symptom reduction or absence of active disease within specific body systems after treatment with epratuzumab.2 Improvements were particularly prominent in cardiorespiratory and neuropsychiatric systems in which symptom improvements are often difficult to achieve.2

These results demonstrated that in a patient population with predominantly high or severe disease activity, differences in responder rates between the epratuzumab 600mg weekly and 1200mg every other week groups, and the placebo group was observed as early as week 12, with the emergence of improvements apparent in week 8.

“We are pleased by the repeated consistency of symptom improvement demonstrated by epratuzumab in all our clinical studies to date and we look forward to confirming these results in our phase 3 studies due to start later this year,” said Prof. Dr. Iris Loew-Friedrich, Chief Medical Officer of UCB. She added, “Achieving a BILAG improvement, especially at an early timepoint seen in EMBLEM™, is a hopeful sign of the drug’s future potential.”

Epratuzumab is a humanised monoclonal antibody targeting CD22 and modulating B cell activity1. Although the exact role of CD22 is not fully understood, it is considered to be a regulator of B cell function. B cells are known to contribute to SLE by producing antibodies against the body's own cells and tissues, causing the immune system to turn on itself, resulting in inflammation and tissue damage. Epratuzumab is an anti-B-cell therapeutic, because of its ability to modulate B cell function without depleting a large portion of these lymphocytes.

** BILAG (British Isles Lupus Assessment Group) is a comprehensive scoring system for assessing both current SLE disease activity and changes in that activity since the patient was last seen.

About Epratuzumab
Epratuzumab is a humanized anti-CD22 monoclonal antibody under investigation for the treatment of SLE. CD22 is a B cell specific surface protein that is considered to be involved in B cell function. The product was licensed from Immunomedics, Inc., Morris Plains, NJ, USA. Under the license agreement, UCB owns the rights and is responsible for the clinical development, and commercialization of epratuzumab in all autoimmune disorders including SLE.

About EMBLEM™
In EMBLEM™ (n = 227) patients were randomized to 1 of 6 intravenous regimens: placebo (PBO), epratuzumab cumulative dose (cd) 200, 800, 2400, or 3600 mg in equal divided doses using 2 every other week (EOW) infusions or epratuzumab cd 2400 mg delivered as 4 equal infusions 1 week apart. Concomitant oral corticosteroids (CS) and immunosuppressives (IS) were stable for at least 5 and 28 days, respectively, prior to first study drug infusion. Primary endpoint was responder rate on a combined index of clinical disease activity at week 12 (defined as reduction of all baseline (BL) BILAG 2004 A to B/C/D and BL BILAG B to C/D, no BILAG worsening in other organ systems, and no deterioration in SLEDAI or physician global assessment [VAS]), with no CS, IS and antimalarials increase over BL dose. The study was not powered to detect statistical differences between treatment arms.

By week 12 (see table) combined responder index rates were higher in all epratuzumab groups than in the placebo group, reaching statistical significance in the epratuzumab 600mg weekly group (2400mg cumulative) and the combined group of all 74 patients who received a cumulative dose of 2400mg (600mg weekly and 1200mg every other week).

About systemic lupus erythematosus (SLE)
SLE, commonly referred to as lupus, is a chronic and potentially fatal autoimmune disease with a variable and unpredictable course. Antibodies are generated against the body’s own nuclear proteins causing the immune system to attack its own cells and tissues resulting in inflammation and tissue damage. This can occur in any part of the body, but most often targets the heart, joints, skin, lungs, blood vessels, liver, kidneys and nervous system.

Lupus is characterized by periods of flares, or exacerbations, interspersed with periods of improvement or remission. The Lupus Foundation of America estimated that between 1.5-2 million Americans have a form of lupus, 90 percent of whom are women. Symptoms and diagnosis occur most often between the ages of 15 and 45. In the U.S., lupus is more common in African Americans, Latinos, Asians, and Native Americans than in Caucasians.

About Immunomedics
Immunomedics (NASDAQ: IMMU) is a New Jersey-based biopharmaceutical company primarily focused on the development of monoclonal antibody-based products for the targeted treatment of cancer, autoimmune and other serious diseases. Immunomedics has built a pipeline of therapeutic product candidates that utilize several different mechanisms of action. Immunomedics is developing epratuzumab for the therapy of B-cell hematopoietic tumors, such as non-Hodgkin lymphoma and acute lymphoblastic lymphoma.

Forward looking statements - Immunomedics
This release, in addition to historical information, may contain forward-looking statements made pursuant to the Private Securities Litigation Reform Act of 1995. Such statements, including statements regarding clinical trials, out-licensing arrangements (including the timing and amount of contingent payments), forecasts of future operating results, and capital raising activities, involve significant risks and uncertainties and actual results could differ materially from those expressed or implied herein. Factors that could cause such differences include, but are not limited to, risks associated with new product development (including clinical trials outcome and regulatory requirements/actions), our dependence on our licensing partners for the further development of epratuzumab for autoimmune indications and veltuzumab for non-cancer indications, competitive risks to marketed products and availability of required financing and other sources of funds on acceptable terms, if at all, as well as the risks discussed in the Company's filings with the Securities and Exchange Commission. The Company is not under any obligation, and the Company expressly disclaims any obligation, to update or alter any forward-looking statements, whether as a result of new information, future events or otherwise. 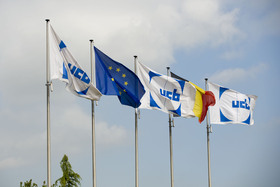