‘Epilepsy In Our Time’

People living with epilepsy from across Europe share their personal stories

• ‘Epilepsy In Our Time’ is a video diary, released to coincide with European Epilepsy Day on 13th February 2012
• Marion, Lloyd, Monica, Jérôme, David and Julie invite you to take a look at their personal experiences of living with epilepsy, through a short, self-filmed diary
• The video diary aims to inspire others to achieve their personal goals

Brussels (Belgium), 13 February 2012, 0700 CET – ‘Epilepsy In Our Time’, a video diary, explores life with epilepsy from the perspective of those living with the condition on European Epilepsy Day – 13th February 2012. The disease is the most common serious brain disorder worldwide, affecting 6 million people in Europe1.

Within the ‘Epilepsy In Our Time’ video diary Marion Clignet, gives her perspective, “There are a lot of issues and a lot of questions on people’s minds, but having epilepsy does not make you a burden to society and on the contrary it can sometimes make you even stronger.”

The ‘Epilepsy In Our Time’ initiative began in 2010 and will continue to visit people living with epilepsy each year to see how their daily lives with epilepsy have changed and whether their hopes or ambitions have been realised. Marion, Lloyd, Monica, Jérôme, David and Julie invite you to take a look at their personal experiences of living with epilepsy, through a short, self-filmed, diary.

The Epilepsy In Our Time 2012 film is available to view at: http://www.youtube.com/watch?v=KXQWsiyyNGo

By learning from other people’s experiences in different countries and cultures, ‘Epilepsy In Our Time’ seeks to inspire people with epilepsy to achieve their personal goals. It is hoped that these video diaries will encourage those living with epilepsy to work together with their healthcare team to seek out the best possible care for them. “My biggest hope and wishes for the future of epilepsy care is, that it becomes accessible, available and affordable for everyone around the world” explains Monica.

“We are proud to launch the second European Epilepsy Day and hope that activities around this day will help to reduce the social and medical burden of the disease and create awareness of the need for increased research funding for epilepsy,” commented Mike Glynn, President of the IBE.

“’Epilepsy In Our Time’ provides a direct insight into what it means to live with epilepsy in 2012. It is important for people with epilepsy and those who care for them to connect with each other for support and inspiration. By sharing personal stories we hope to improve the perception and understanding of the condition,” said Lode Dewulf, MD, Vice President, Global Medical Affairs, UCB.

The individuals sharing their personal stories through ‘Epilepsy In Our Time’ come from a variety of backgrounds:

• Jérôme from Germany, a physical therapist and champion swimmer, developed epilepsy in childhood but has been seizure free since 2003.
• Monica, who lives in The Netherlands, did not have an accurate diagnosis or control of her epilepsy until the age of 45.
• Lloyd, from the UK, traces his epilepsy back to a minor head injury sustained in a car accident and continues to work full-time to support his family.
• David and Julie are also from the UK and care for their son Dominic who has a severe form of epilepsy and can experience more than 60 seizures a month.
• Finally, Marion who lives in France, is a world-class cyclist, winner of six world titles and two silver Olympic medals and has lived more than half her life with epilepsy. 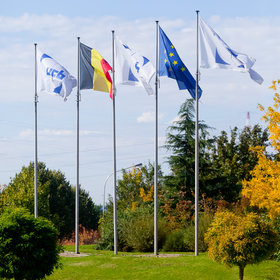