I was diagnosed with Parkinson’s in 1996 and, as a chartered physiotherapist, I had a working knowledge of the disease, or so I thought. But I never connected Parkinson’s with my tennis elbow, which turned out to be an early symptom.

I thought the aching in my right arm that I lived with for more than a year might be Multiple Sclerosis or a brain tumour. I was thankful that it was neither, but still devastated when told I had Parkinson’s. It took another year to work up the courage to tell my parents and, when I did, I couldn’t stop crying. Talking about my diagnosis can sometimes still feel raw.

I’ve tried several medications, and tolerated them well. But when I had more freezes recently, I talked to my neurologist. It’s important to have a good relationship because this will be a long-term one and there are no quick fixes. I’m glad to know that no matter what comes up, I can talk to my doctor and his team about my needs.

My family was shocked by my diagnosis, and it was a rough period for us all. In the fullness of time everyone has got used to me being slow and shaky. Today, my family are my greatest supporters.

For the first eight years, I didn't seek the company of other people with Parkinson’s because it was like looking at my future—a future I didn’t want to face.  But since I gave up work, I’ve done loads of awareness-raising sessions and find it easier to talk about Parkinson’s. Now I enjoy the banter and comradeship of the Parkinson’s "club."

Sometimes people are too kind.  It sounds peevish, but I really don’t need to be treated like an invalid.  I can hold a coffee cup, and I can make it up the stairs and walk quite a long way.  But I only have two speeds: slow and stop.

I don’t enjoy how my muscles and joints are getting stiffer as the years go on and I have to increase my own physiotherapy. My dizziness and vertigo make showering and getting dressed difficult. In the early days, my nose played tricks with me – sending me bad smells, such as burning rubber at all hours of the day and night, or blocked drains that were not blocked! Now, I smell nothing.

That terrible day when you get your diagnosis feels like the world has ended.  I can still feel it in the pit of my stomach.  But since then, I’ve walked on the Great Wall of China, I have been to Norway, Spain, and Australia. I have received a Master’s degree, learnt how to use a griddle in my lovely new kitchen, and bought a caravan in Wales.  So the world continues to turn despite the diagnosis.

Living with a long-term health condition is a journey with potholes and bumps, but also long stretches of smooth highway.  I love to cook, I love to eat and I love to party. I don’t live for my Parkinson’s disease, I live alongside it. 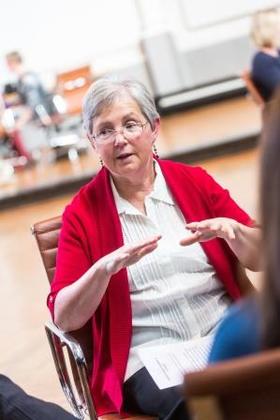