Beginnings can be intense. I remember my first friend and my first kiss who doesn’t?

And the first time I ever flew on a plane, it was from Peru to Miami. I was so pumped that I couldn’t sleep, even though the flight was at 10 o’clock in the evening! I don’t think I’ll ever forget the first time I stayed out too late at a party and spent the night without permission. My mom hasn’t forgotten that either.

The very first time I had a seizure was no exception. It was early on a Saturday. I was twelve years old, and I had a friend over. We’d just gotten my bicycle back from having it painted, and the two of us were reassembling it. We were up on the roof, which sounds crazy, but it was a largely level surface, and the light was good up there. We had the bike on a stand with its base up in the air. We were just putting the wheels on when it happened.

All at once, everything happening around me started to slow down. My vision seemed to fail, my surroundings progressively darkening as if someone were dimming a light. Birdsong and other noises in the background faded, and I felt my body shift slowly to the right. I was falling. Even though I wanted to hold my body up, I couldn’t. That’s the last thing I remember. A few minutes later, I woke up surrounded by my family. The first face I saw when I opened my eyes was my mom’s. My friend, who was terrified, had caught me when I’d fallen and kept me from striking my head on the roof.

For people who don’t know, when you have a seizure, you’re out of it. People think you’re in pain, but you’re not. Your facial muscles may contort, and you might scream or cry, but you don’t feel anything. During my first episode, I didn’t experience pain, but I did feel hopeless, absent, and totally disconnected from my world. Later, my head ached horribly, and my jaw was sore. I didn’t understand why.

For this art project, I wanted to be sure I truthfully depicted my feelings. I am employed as a contractor for an airline and work regularly on engines and landing gear, so that inspired my drawing. I tried to get the colors right. We used my daughter’s crayons and even my wife’s eyeshadow for the outer space part. It’s sort of a grayish-blue. I knew black would be too dark, and I don’t ever feel that I’m in the dark if I’m having a seizure. It just feels like I’ve gone somewhere else. 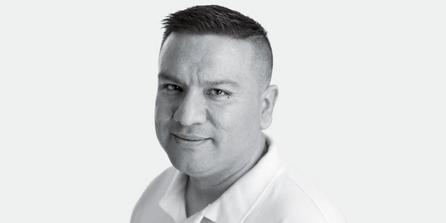 In my experience, that first onset of something big can be unforgettable, pleasant or not. 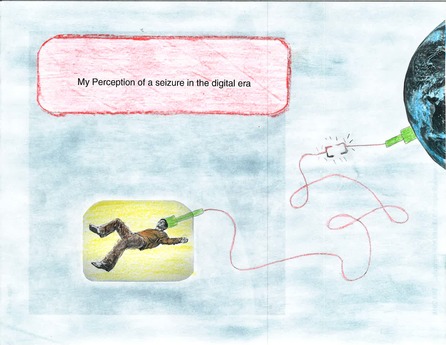