Five years ago when Trish Zimmerman walked through UCB’s doors on her first day as an employee, she saw a poster about a company program dedicated to helping people with Crohn’s disease.

As a person living with the disease every day, she said, “This is where I’m supposed to be.” Now working in UCB Market Access, her role has evolved to include
passionate and vocal advocacy to educate and train colleagues from the patient perspective.

She didn’t always feel so confident in her role as advocate. Diagnosed in the early 90’s, Zimmerman’s journey is like that of a lot of people who were diagnosed at the time -- doctors who didn’t fully understand the disease, a family who
thought she was faking her flares, and treatment plans that failed to control her disease. One day she was asked by a doctor who she worked for at the time – but who didn’t treat her – about her unexplained absences from work. It was
the first time she really opened up and told him about her frustration and the embarrassing details of her disease. His response: “What are you doing about it?” Zimmerman explains that he made her, sometimes kicking and screaming,
spend three hours every Friday in the medical library to learn what she could about her disease and how to advocate for herself.

Twenty years later, her journey brought her to UCB where she eventually became the Captain of the UCB team for the Atlanta Take Steps for Crohn’s & Colitis Walk, organized by the Crohn’s & Colitis Foundation of America (CCFA). She
later joined their planning committee and explains that this partnership has become the most healing part of her journey because it changed from being about her personal experience to helping others with the disease.

From advocating for cooler shirts at local walks to presenting the “Crohnnie” experience to her colleagues, Zimmerman is driven by a different passion. She is proud that she works for a company that is making a difference and wants to
instill that pride in her colleagues.

She sums up her role as an advocate by saying: “I don’t like talking about it, and I hate to walk, but I have to because no one ever fought for me.” 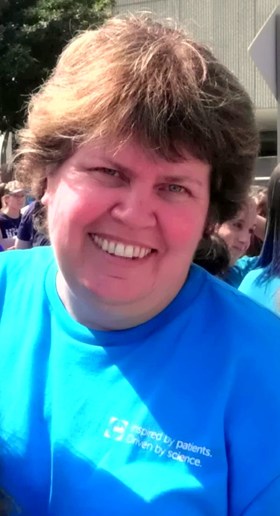